Harish Bangera, an AC mechanic, had been arrested on December 22, 2019 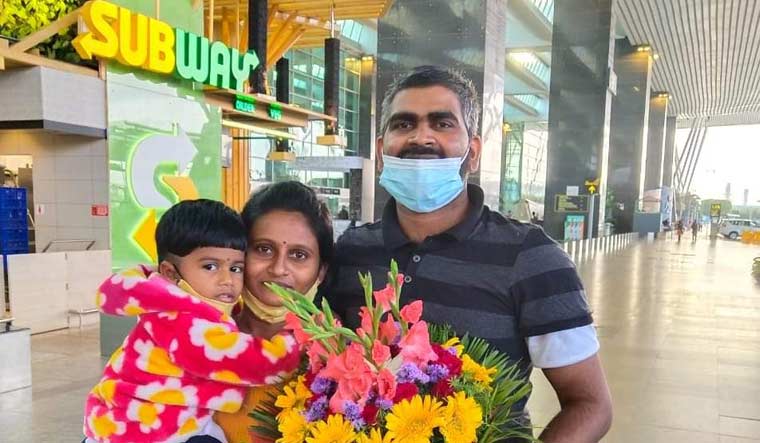 Harish Bangera with his family | Twitter handle of Shobha Karandlaje

In December 2019, the Karnataka Police sought the assistance of Facebook to aid a native of the state who was arrested in Saudi Arabia. Harish Bangera, an AC mechanic, had been arrested on December 22, 2019, for allegedly posting derogatory content against Mohammad Bin Salman, the crown prince of Saudi Arabia, and Mecca, one of the holiest sites in Islam.

Investigation by the police in Udupi revealed the account from which the posts were made was a fake one created in the name of Bangera. Bangera's ordeal ended on Wednesday as he reached Bengaluru after spending 604 days in jail in Dammam.

Bangera's ordeal had begun in December 2019 when he made a post in support of the Citizenship (Amendment) Act and the National Register of Citizens (NRC). Bangera deactivated his Facebook account after the post earned the ire of his employer. He even released a video apologising for the post. Soon after this, another Facebook account emerged in his name, in which derogatory posts were made against the crown prince and Mecca.

Investigation by the police in Karnataka revealed the account was created by two brothers in Dakshina Kannada district, who were angry at Bangera over his support to the CAA and NRC.

"In October last year, local police arrested two brothers from Moodbidri town in Dakshina Kananda district, Abdul Huyez and Abdul Thuyez, after their probe found that the two had created the Facebook account in Bangera’s name the same day as he deactivated his profile. According to police, they did it out of anger over Bangera sharing a post supporting the CAA and NRC," The Indian Express reported.

The Udupi police also submitted the charge-sheet to authorities in Saudi Arabia through the ministry of external affairs. Bangera was finally released on Tuesday.

After arriving in Bengaluru, Bangera told The Indian Express, "I was made to look like a terrorist by posts that were made by somebody else. My family and I went through horrific times. Before I was jailed, I used to make video calls to my wife and daughter three-four times a day. I barely spoke to them after I was jailed.”

"Initially, we did not have much support. However, once the Facebook report came and a case was filed, I was confident that justice would prevail. It has been a difficult phase, emotionally and financially and in the beginning it was difficult to even speak to my husband over the phone. However, gradually, I was allowed to speak to him once a week. I will not allow him to leave behind his family and travel abroad again. We now need support to start a new life,” his wife Sumana told The Times of India.

She added she was forced to work as an anganwadi teacher after Bangera's arrest.

Union Minister for Agriculture and Farmers’ Welfare Shobha Karandlaje had tweeted an image of Bangera with his family after his arrival in Bengaluru. She thanked External Affairs Minister S. Jaishankar and V. Muraleedharan, the minister of state for external affairs in the post.