'No BJP without BSY': Lingayat seers rally behind Yediyurappa amid ouster rumour 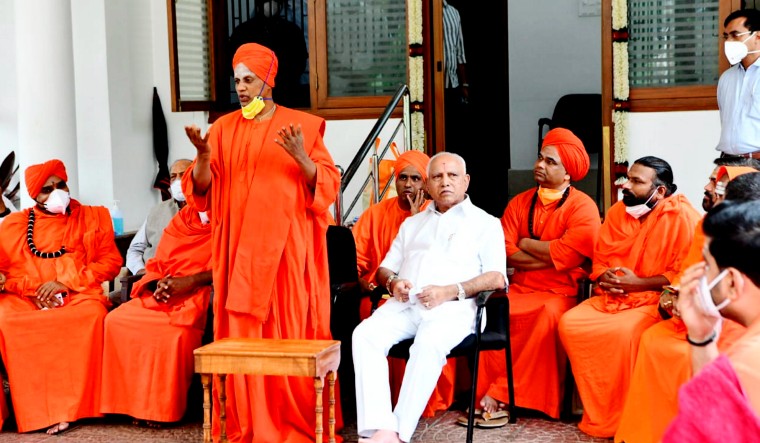 The BJP in Karnataka is perhaps facing one of its toughest challenges—of replacing its tallest Lingayat leader Chief Minister B.S. Yediyurappa without antagonising the Lingayat community, which is a core votebank of the party.

While Yediyurappa's Delhi visit last week has led to speculations of his stepping down after July 26, when he completes two years in office, a stream of Lingayat pontiffs from across the state visiting the CM's official residence 'Cauvery' in Bengaluru is being seen as a show of strength by the community.

The seers rallying behind Yediyurappa have warned the BJP high command of a "political backlash" by the community if the party decides to remove Yediyurappa as the chief minister.

The pontiffs asserted that Yediyurappa was a "big force" who brought the BJP to power twice in Karnataka. They also warned against unceremoniously removing Yediyurappa saying there would be "no BJP without BSY".

Dr. Shivacharya Swami of Sanehalli Mutt slammed the Centre saying no chief minister could provide good governance if there was no freedom.  "The Centre is trying to control the state governments. Let the chief minister be allowed to complete his term," said the pontiff.

Sri Siddalinga Swami of Sri Siddaganga Mutt, Tumkur, said, "We noticed that there were talks of replacing the chief minister despite his good work. Yediyurappa could not complete his tenure as the CM in the past and is facing a similar situation now. All the seers are of the opinion that Yediyurappa should be allowed to complete the term. When we met Mr Yediyurappa today,  he clearly told us that Prime Minister Narendra Modi, Amit Shah and Nadda ji have special regard for him and he was given a chance to be the CM though he was above 75. He told us he will dedicate his life to serving the party,  which is like a mother to him. He never revealed anything about his resignation. So, we feel that any change in leadership can happen during the next elections as we need a stable government as we are facing a pandemic."

Yediyurappa has found support from unusual quarters too, from senior Congress leaders and fellow Lingayats Shamanur Shivashankarappa and M.B. Patil, who have warned the BJP against "ill treating" Yediyurappa stating the party would face the wrath of the Lingayat community. "The BJP should value the contribution of Yediyurappa and treat him with dignity," said Patil.

Shivashankarappa, who is chief of Veerashaiva Mahasabha, recalled that it was Yediyurapppa and late B. B.  Shivappa who had built the BJP in the state. "If the BJP is considering removing Yediyurappa as the CM,  it is their bad luck. The party leadership should think about the political consequences of such decisions. We urge the BJP to continue BSY as CM."

Some of the pontiffs reminded the BJP about the plight of the Congress party after Veerendra Patil (another Lingayat chief minister) was removed unceremoniously from the post. The Lingayat community had quietly shifted its loyalty to the BJP in the wake of the move.

Interestingly, senior BJP leader and Rajya Sabha member Subramanian Swamy tweeted to warn the BJP against "repeating its mistake".  "It was Yeddiruppa who first brought BJP to power in Karnataka. Some conspired to remove him since he would not be a chamcha. Without him BJP could not return power in the state. Only upon his return to BJP could the party win again. Why repeat the same mistake?," asked Swamy.

Meanwhile, the Lingayat pontiffs' move to support Yediyurappa has evoked strong reactions from both Lingayat and non-Lingayat leaders.

BJP MLC H. Vishwanath, a Kuruba leader, slammed the seers saying, "The religious leaders should be the voice of the society and not indulge in power politics."

Senior politician and Kannada activist Vatal Nagaraj condemned the chief minister and the seers saying, "The mutts had a rich legacy. But today, the pontiffs have hit the street. Yediyurappa has turned the mutts into unholy places by using them to armtwist the party. The pontiffs should restrain themselves from interfering in politics."

BJP MLAs and Lingayat leaders Basanagouda Patil Yatnal (Vijayapura) and Ravindranath (Davangere north) condemned the seers for patronising an individual.  "We are also Lingayats, myself, Nirani, Shettar and Katti. Why are the seers rallying behind one individual," asked Ravindranath.

The BJP top brass, which is opposed to the party's dependency on any one community or leader, seems to be planning a "graceful exit" for Yediyurappa. But zeroing in on the next CM demands a fine balance of political prudence and assertive leadership.