With Sadananda Gowda's 'homecoming', is BJP setting the pitch for 2023 assembly polls in Karnataka?

Gowda might be expected to focus on BJP's expansion, especially in Old Mysuru region 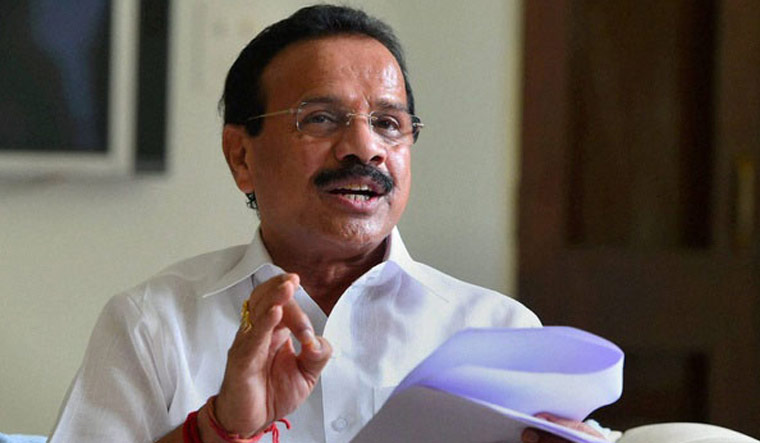 Former Karnataka chief minister D.V. Sadananda Gowda, one among the 12 senior ministers to be dropped from the Modi cabinet recently, was accorded a hero's welcome by party workers when he landed at the Kempegowda international airport in Bengaluru on Friday evening.

The recent cabinet rejig has paved the way for younger leadership at the Centre. However, the seniors, who have been dropped, seem to have a bigger role cut out for them in the party, as elections are getting tougher for the ruling BJP to win.

Karnataka is the only south Indian state to be ruled by the saffron party and is considered the gateway to BJP's expansion plan.

Gowda, the 68-year-old Vokkaliga leader, a two-time MLA, one-time MLC and four-time MP (twice from Dakshina Kannada and then from Bengaluru North) has an impressive career graph. Also, it was during his stint as the state BJP president that the party came to power in Karnataka for the first time in 2008, under the leadership of B.S.  Yediyurappa. Gowda, known as an organisational man, became the 20th chief minister in 2011 after Yediyurappa stepped down as CM over his indictment by the Lokayukta in the illegal mining case. Gowda lasted for barely a year as he failed to hold the party together.

With the Modi government coming to power in 2014, Gowda was handed over the Railways portfolio. However, his lacklustre performance led to his demotions in the cabinet--from Railways to Law and Social Justice and to Statistics and Programme Implementation.

Following the demise of H.N. Ananth Kumar, Gowda was allotted the Chemicals and Fertilisers portfolio, which he continued to hold in his second stint as a minister till the cabinet reshuffle on July 8.

"I feel indebted to my party workers for showering their love on me when I have stepped down as a minister. This has motivated me to work harder. We must all work together to strengthen the party and ensure that BJP wins at least seven seats in Bengaluru North (Parliamentary constituency) in the 2023 assembly polls," said Gowda, who turned emotional on seeing the huge crowd of party workers and his supporters.

"I resigned as a minister as soon as the party president J.P. Naddaji telephoned me and other senior ministers on July 8 morning,  and told us our services were needed to strengthen the party. Over the last 27 years,  the party gave me every opportunity and post possible, and I discharged my responsibilities with dedication. I have suffered humiliations and endured the ups and downs of political life," said Gowda,  while speaking to the reporters.

Back in the pavilion, Gowda might have to focus on the BJP's electoral performance in the state that has remained wanting. The party has always fallen short of a clear majority owing to its poor show in the Old Mysuru region (BJP holds nine out of 59 seats, excluding Bengaluru Urban) and Hyderabad-Karnataka (15 out of 40 seats) regions, which has also led to the advent of the controversial "Operation Kamala" (poaching of MLAs from rival camp) in the state.

While the saffron party has managed to consolidate its support in the Lingayat-dominated North Karnataka and Central Karnataka with the mass appeal of Lingayat strongman Yediyurappa and its social engineering, the Hindutva wave continues to make winning polls a breeze for the party in the Coastal Karnataka region.

The BJP's lack of strong leadership in the Old Mysuru region, a strong forte of the Congress party and the Janata Dal-Secular, takes the blame for the party failing to attain a clear majority (113 seats in the 224-member assembly).

The former prime minister and JDS patriarch H.D. Devegowda is the tallest Vokkaliga leader. The power tussle between Devegowda's son and former chief minister H.D. Kumaraswamy, and KPCC chief D.K. Shivakumar, to emerge as a political successor to Devegowda is no longer a secret. The rise of Kuruba strongman and former chief minister Siddaramaiah has spelt the end of Vokkaliga dominance in the region,  making it a level playing ground for all three parties.

If the BJP bagging 11 out of the 28 assembly seats in Bengaluru Urban, which has a sizeable Vokkaliga population, combined with Devegowda's defeat in Tumkur and the BJP wresting 25 of the 28 seats in the 2019 Parliament polls is any indication, the BJP stands a good chance to make a foray into the Vokkaliga heartland.

In July 2019, many Vokkaliga leaders from the Congress and the JDS--Dr K. Sudhakar, S.T. Somashekhar, K. Gopalaiah, and Narayana Gowda, jumped ship to the BJP during "Operation Kamala" that toppled the coalition government and installed a BJP government in the state. This has built an impressive lineup of Vokkaliga leaders in the party now.

Taking a cue, the BJP high command has made the Vokkaliga leadership within the party more visible by anointing Dr Ashwathnarayan as one of the three deputy chief ministers. The party also elevated Chikmagalur MLA C.T. Ravi as its national general secretary, and more recently, inducted Karandlaje into the Union cabinet (as Gowda's replacement).

Ahead of the crucial 2023 assembly elections, Gowda and his fellow Vokkaliga leaders sure have a daunting task--to breach the JDS and the Congress territory, and harvest seats to establish their political dominance in the region.

For Gowda, it's not the end of his political innings, but the beginning of slog overs.