Who will replace Yediyurappa? List of probable CM faces in Karnataka

From Prahlad Joshi to Arvind Bellad, the list is long 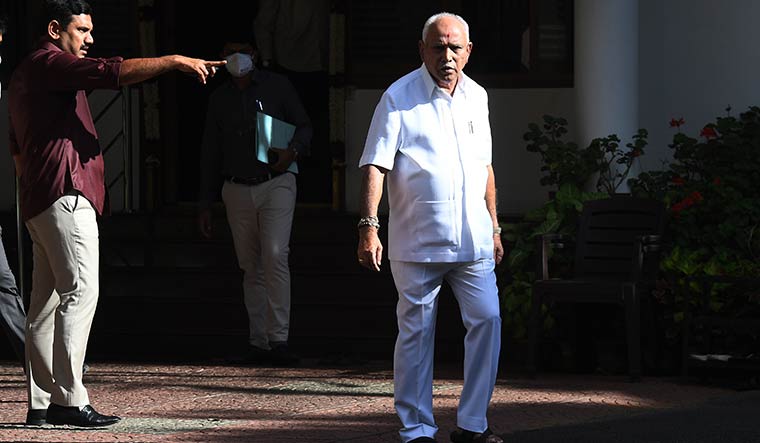 The suspense over a change of guard in Karnataka continues as Chief Minister B.S. Yediyurappa remained silent over his rumoured resignation. A leaked audio conversation purportedly of BJP state president Nalin Kumar Kateel indicating that the chief minister will soon be replaced, has led to further speculation over the CM's replacement by around July 26, when Yediyurappa completes two years in office. The list of CM aspirants is no doubt a long one and finding a replacement for a mass leader like Yediyurappa, who holds sway over numerically and politically strong Lingayat community, can be a daunting task for the BJP. However, the BJP top brass is sure considering a few names seriously in the hope of bringing the much-needed "generational shift" in leadership, but without disturbing its core vote bank—the Lingayat community.

A four-time MP from Dharwad constituency, Joshi is a Brahmin leader from the Lingayat heartland. Currently serving as the Union Minister for Parliamentary Affairs, Coal, and Mines, Joshi is an RSS loyalist and is known to have a good equation with the Lingayat community. He has served as the general secretary of Karnataka BJP and also as the state party president.

Joshi, an industrialist (a partner in a small scale industry - Vibhava Chemicals), is an Arts graduate from Karnatak University, Dharwad. He took the plunge into politics by organising a movement to hoist the tricolour at Idgah maidan (also known as Kittur Rani Chennamma Maidan) in Hubballi. On August 15, 1994, when BJP's firebrand Hindutva leader Uma Bharati entered the Idgah maidan to hoist the flag defying the prohibitory orders, Joshi was one of the leaders to accompany her.

Born into a Brahmin family of a Railway employee in 1962 at Vijayapura, Joshi is the third child of late Venkatesh Joshi and Malatibai. He was elected the president of BJP in Dharwad district and he contested in the 14th Lok Sabha elections in 2004 from Dharwad constituency and defeated Congress candidate B.S. Patil.

Joshi served as BJP Karnataka state unit general secretary and went on to become its president ahead of the 2013 Assembly polls, when Yediyurappa had quit the BJP and floated a new party—KJP.  The ruling BJP was decimated to 40 seats in the polls.

A four-time legislator from the Chikkamagalur constituency, Ravi is a prominent Vokkaliga face of the BJP in  the Malnad region and is known for his hard-line Hindutva politics.

In September 2020, Ravi, who was serving as the Tourism and Kannada and Culture minister in the Yediyurappa's cabinet, was elevated as BJP national general secretary. He joined BJP national president J.P. Nadda's 70-member team of office-bearers and was made in-charge of Tamil Nadu ahead of the 2021 Assembly elections, besides Goa and Maharashtra.

Ravi has previously worked as deputy in-charge in Tamil Nadu, Puducherry, Andaman and Nicobar during the 2019 Lok Sabha elections.

Hailing from a non-political family, Ravi started his political journey from Aldoor in 1987, when he became the Yuva Morcha head at Chikamagaluru.

Ravi, a graduate, was part of the Akhil Bharatiya Vidyarthi Parishat in his college days and eventually grew close to the RSS, before joining the BJP in 1987. He contested the Assembly elections from Chikkamagaluru in 1999 and lost to Congress candidate C.R. Sagir Ahmed by 800 votes. But he defeated Ahmed in 2004 with a margin of 25,000 votes to enter the state Assembly for the first time.

Ravi shot to the limelight when he spearheaded the Datta Peeta movement in Bababudangiri Hills, a pilgrimage centre for Hindus and Muslims as it houses the seat of Dattatreya (Hindu trinity) and a Sufi dargah. While the shrine is entangled in a land dispute, it has been a long pending demand of the BJP to declare it as a Hindu shrine.

In the forefront of the Datta Peeta movement in the 1990s, Ravi toured 29 assembly constituencies across seven districts and embarked on a 250-km yatra on foot for 10 days from Chikkamagaluru to Bengaluru to mobilise public opinion on the need to "liberate" Datta Peeta from the dargah. He has served as higher education minister in the previous BJP government (2012).

During the recent Assembly polls in Tamil Nadu, the firebrand Hindutva leader was detained by the TN police in Tiruttani along with other BJP leaders for participating in the Vetri Vel Yatra amid a pandemic. The yatra was meant to consolidate the Hindu votes and assert a common Hindu identity in the Dravidian land.  "The yatra did not yield electoral dividends, but it sure created a small wave," said Ravi in an interview post the elections, also contending that there was no difference between Dravidianism, Hindutva and Sanatana Dharma.

Ravi's organisational skills, affiliation to Sangh Parivar and administrative experience make him a strong contender, if the BJP top brass decides to anoint a non-Lingayat leader as the chief minister, especially when both the Congress and the JD(S) have strong Vokkaliga faces—KPCC chief D. K. Shivakumar and former chief minister H. D. Kumaraswamy respectively—leading the party.

A two-time MLA from Hubli-Dharwad West Assembly constituency, Arvind Bellad is the son of Chandrakant Bellad, who had been elected from the same (Dharwad) seat five times. Chandrakant Bellad is a veteran RSS and BJP leader who helped BJP expand in north Karnataka by garnering the Lingayat support. He is one of the leaders responsible to transform the "Brahmin party" into "Basavanna party" in the region.

Arvind, an engineering graduate and a businessman, who keeps a low profile, is popular in his constituency for his pro-activeness in bringing new schemes. His initiative to start pre-primary classes in government schools helped improve enrolment in government schools.  His 'Namma Mane' initiative to provide houses to the poor was in tune with Modi's housing-for-all concept. During his last term, he had released a mobile app, 'Namma Bellad', to redress the grievances of his electorate.

In June this year, Arvind alleged that his phone was being tapped and attempts were on to fix him in some case. He claimed that he had got suspicious after he got calls from one Yuvaraj, an alleged conman who is lodged in jail.

Arvind represents the Panchamasali Lingayat subsect and is said to be the choice of B.L. Santosh, BJP's national general secretary (Organisation), as the BJP is keen to retain the Lingayat support post Yediyurappa's stepping down as the CM. His clean image, non-controversial nature and young age might work in his favour as the party is hoping to groom an amicable Lingayat leader for a longer haul.

The current mines and geology minister in the Yediyurappa cabinet, Nirani belongs to the Panchamasali subsect of the Lingayat community. A third-time MLA from Bilgi constituency in Bagalkote, Nirani is a civil engineering graduate and an ambitious and successful industrialist who owns sugar and cement factories.

Nirani has been backing the Panchamasali movement demanding inclusion of the community in the 2A category of the backward classes (OBC) list that entitle them to 15 per cent reservation in government jobs and education. Nirani's recent visit to Varanasi, to coincide with Prime Minister Narendra Modi inaugurating several projects, has led to further speculations over his possible role in the state.