In her speech, Banerjee would be stressing on the state of the economy of the country 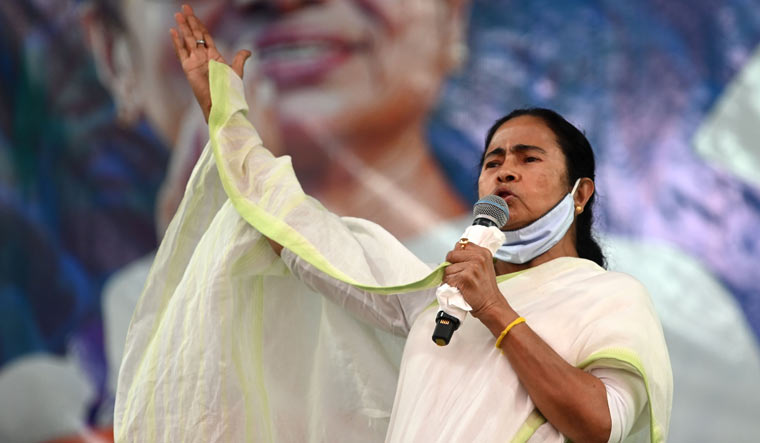 The customary speech by West Bengal Chief Minister Mamata Banerjee on the occasion of Martyrs Day on July 21 is a closely watched event every year. She has used the event to make important announcements and policy decisions ever since she became chief minister. This time, Banerjee is adding a new touch: She is expected to speak a larger portion of her speech in Hindi.

TMC leaders are on the job to stream Banerjee’s speech in Gujarat, Uttar Pradesh, Madhya Pradesh and even in many states in South India. The party’s tech cell is working hard to get the message put across.

The speech this year—and obviously in the next couple of years—would be keeping in mind the 2024 Lok Sabha election. This year, the special focus would be on Uttar Pradesh, which would go to polls next year.

In fact, talks are on with parties friendly to the TMC to get at least a dozen seats to contest in Uttar Pradesh in the 2022 Assembly election.

“We need to get a footprint in UP. And after defeating BJP, obviously she would be a strong contender against Modi during 2024 election. But there would be no bargain but only some special arrangement can be done to make us part of the alliance against BJP in 2022 Assembly election there [in UP],” said a leader of TMC on condition of anonymity. For that, Banerjee is not ruling out the idea of talking to Mayawati.

On July 21 (Wednesday), Banerjee would be stressing on the state of the economy of the country and how she overcame the obstacles in 2021 Assembly election against all odds. The rising fuel prices, handling of the second COVID wave and lack of vaccine availability would be her focus as well.

While keeping the economy in mind, TMC has also decided to send a leading economist of the country to the Rajya Sabha, after a seat fell vacant following the resignation of former leader Dinesh Trivedi. If sources are to be believed, one of the eminent economists of India Professor Abhirup Sarkar is being persuaded to contest the Rajya Sabha election.

Sarkar, a professor of economics in Indian Statistical Institute, who is also a visiting professor in many foreign universities, was one of the architects of change in West Bengal in 2011 that saw the ouster of the 34-year-long Left Front government. He was one of the key persons who scripted a policy of governance for TMC before the historic 2011 election. Sarkar, however, refused to join politics despite him being considered the front runner for state finance minister.

If Sarkar, chairman of the Sixth Pay Commission constituted by the West Bengal government and an adviser to Banerjee on the economy, agrees to go to Parliament, it is obvious the TMC’s voice on the Indian economy would be strengthened.