Asks govt to make sure sufficient facilities are given to customers 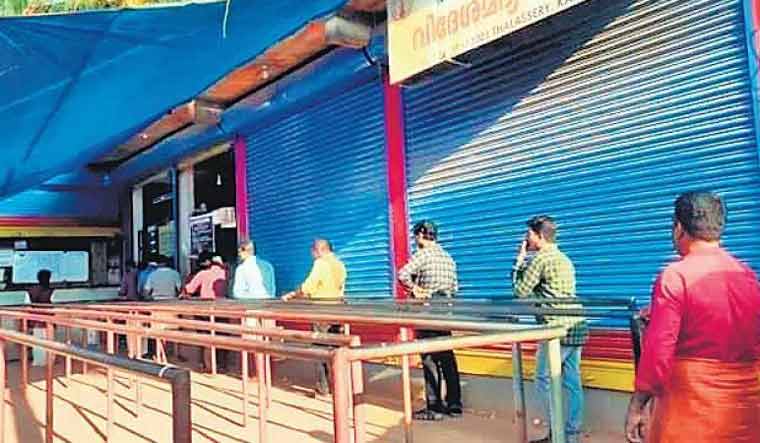 The Kerala High Court on Thursday rapped the state government over the overcrowding in front of the state-run Beverages Corporation's (BEVCO) outlets amid the pandemic and asked it's MD and the state excise commissioner to file a report on the steps taken to reduce the crowd.

Justice Devan Ramachandran, who heard the matter today, said customers lining up in front of liquor shops and spilling over to public spaces and roads, was certainly an affront to the dignity of a society as a whole.

The court asked the state government to make sure that sufficient facilities are given to the customers so that they can make their choice of purchase of liquor in a civilised manner like any other commodity.

Justice Ramachandran said the endeavour of the court was not to find fault but to ensure a nagging problem that the state has been facing for the last several years be resolved in the most effective manner.

"When customers line up in front of liquor shops and spill over to public spaces and roads, it certainly is an affront to the dignity of a society as a whole.As far as the customer is concerned, he is put to a great amount of humiliation, which he is forced to endure because thesale of liquor isvirtually a monopoly at the hands of Bevco," the judge said.

He said it becomes the absolute duty of the government to make sure that sufficient facilities are given to the customers so that they can make their choice of purchase of liquor in a civilised manner like any other commodity and "then leave the counters without their self-respect being compromised".

"However, what we now see, which is not confined to the factual scenario of this case alone, is that every counter or at least most of them in Kerala has these long queues of people waiting for hours to obtain their quota of their favourite beverage," the court observed.

The court pointed out that the spread of pandemic was through aerosol particles and it was mandatoryfor the public to keep one metre distance.

The long queues before the outlets are happening at a time when the test positivity rate was still increasing,the court said an directed the state government to file a report on the steps taken to reduce the crowd before July 13, the next date of hearing.

The court had yesterday said health is more important than revenue and that Kerala was presently at no.1 in COVID cases among all the states and while the state was trying hard to reduce the number of infections by taking appropriate measures, crowding at public places, more particularly in liquor shops, should not be allowed.

The bench was hearing two PILs, one filed by a lawyer - Vijayan - who has sought directions to the state to prevent overcrowding outside liquor vends during the pandemic, and the second initiated by the High Court on its own based on a letter by one of its judges on the same issue.

BEVCO told the court that liquor shops were closed for a few days and were opened on June 17 and that was the reason for the queues.