Mukul Roy says many BJP MLAs are in touch with him

TMC will not be able to welcome all of them, says CM Banerjee 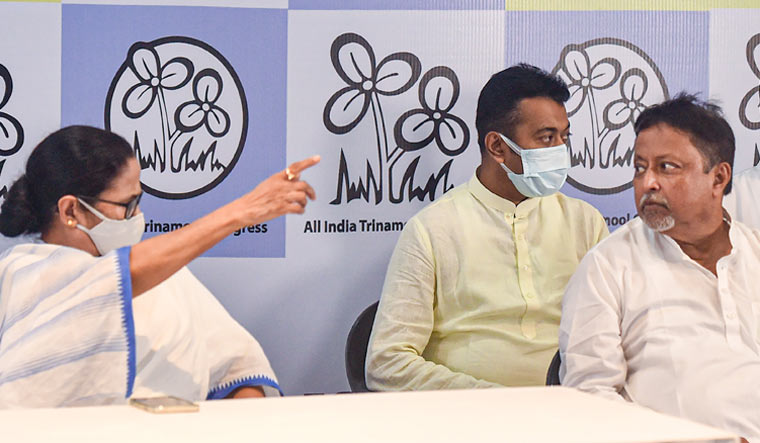 Mukul Roy, who returned to the Trinamool Congress on Friday, had blamed the BJP for not taking care of him when he and his family have been fighting the COVID-19 battle. His wife is on ECMO support, and according to hospital sources, she is "extremely critical and facing the condition of multi-organ failure.”

Now, the chief minister has made attempts to send Roy's wife to Chennai through air ambulance for treatment.

A few days ago, Roy's son Subhranshu Roy had said he was moved by the courtesy and humane gesture of Abhishek Banerjee, the newly appointed general secretary of the Trinamool Congress, who visited the hospital and enquired about his mother's illness.

Roy, accompanied by his son, joined the Trinamool Congress in the presence of Chief Minister Mamata Banerjee and Abhsihek Banerjee.

Roy said he is happy to make the comeback and is glad to see his old friends. He said he regrets the decision of joining the saffron party, and added that he could not continue in the party any longer. “Whatever I have to say, I would tell you through written statement," he added.

Subhranshu, however, did not speak.

Roy was tortured by BJP through central agencies, the chief minister said.

The decision of Roy to return to the TMC is humiliating for the BJP as Roy had not even resigned from the post of national vice president of BJP before rejoining the TMC. He rejoined the party at a time when the investigation into the Narada case, in which Roy is an accused, is in full swing.

Roy, an MLA from Krishnagar (North), said many BJP MLAs are in touch with him. The party (TMC) will take a call on them, he added.

Banerjee, however, said she would not be able to welcome all of them. In an apparent dig at Suvendu Adhikari, she said, "We will not take back real betrayers who backstabbed us just for money."

Banerjee said Roy will get his position in the party back.

However, it is not clear how this promise will be met as Roy used to be second-in-command in the TMC, a post now occupied by Abhsihek Banerjee.