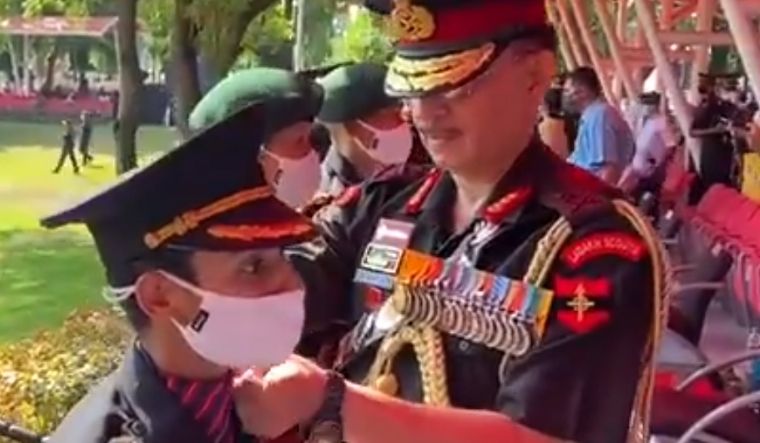 Northern Army commander Lt Gen Y.K. Joshi piping stars on Nikita Kaul's shoulders as she joined the Indian Army at an event in Chennai on Saturday | via Twitter

I owe my life to you—these are the words of Nikita Kaul, wife of Major Vibhuti Shankar Dhoundiyal who was killed in an encounter with Jaish-e-Mohammad (JeM) militants in Pulwama in 2019. Major Dhoundiyal laid down his life in the day-long encounter about 15km away from the spot where 40 Central Reserve Police Force (CRPF) troopers were killed in a suicide attack by JeM militant Adil Ahmed Dar on a convoy in Feburary 2019.

On Saturday, a little more than two years after Major Dhoundiyal's martyrdom, 28-year old Nikita Kaul joined the Indian Army as a lieutenant. Indian Army's northern command has shared a video in which Kaul donned the Army uniform even as Northern Army commander Lt Gen Y.K. Joshi piped stars on her shoulders at a ceremony held at the Officers Training Academy in Chennai.

Kaul had vowed to join the Army soon after her husband's demise. She appeared and then cleared the Short Service Commission examination as well the Service Selection Board (SSB) in 2020. After six months of training at the Officers Training Academy, she joined the army ranks on Saturday. "Major Vibhuti Shankar Dhoundiyal made the supreme sacrifice at #Pulwama in 2019, was awarded SC (P). Today his wife @Nitikakaul dons #IndianArmy uniform; paying him a befitting tribute. A proud moment for her as Lt Gen Y K Joshi, #ArmyCdrNC himself pips the Stars on her shoulders!" tweeted PRO Udhampur, the ministry of defence.

#MajVibhutiShankarDhoundiyal, made the Supreme Sacrifice at #Pulwama in 2019, was awarded SC (P). Today his wife @Nitikakaul dons #IndianArmy uniform; paying him a befitting tribute. A proud moment for her as Lt Gen Y K Joshi, #ArmyCdrNC himself pips the Stars on her shoulders! pic.twitter.com/ovoRDyybTs

Union Cabinet Minister for Textiles and Women & Child Development Smriti Irani also reacted to Nikita  joining the army. "Lt. @NitikaKaul, you’re an embodiment of dedication, determination and devotion of India’s Nari Shakti. Major Vibhuti Dhoundiyal would be smiling today with joy and pride seeing stars on your shoulder. My best wishes to you in all your endeavours."

The duo had not even completed one year after their wedding when Major Dhoundiyal was killed in the encounter. Making an emotional statement, Kaul had said at the time of his funeral that joining the Indian Army was her way of paying tribute to her late husband, to "feel close" to him.

"You said you loved me, but the fact is you loved the nation more. I am really proud. We all love you. The way you love everyone is entirely different because you sacrificed your life for the people who you may have never met, but still you decided to give your life for them. You are such a brave man. I am very honoured to have you as my husband. I'll love you till my last breath. I owe my life to you," Kaul had said.

India has had several instances of widows of martyrs joining the Army. In 2017, 38-year-old Swati Mahadik, a mother of two, and wife of Colonel Santosh Mahadik, who died during an encounter with militants in Jammu and Kashmir, was commissioned as an officer in the Army Ordnance Corps. Similarly, Nidhi Dubey, who had also lost her husband—a Naik—was also commissioned as an officer in the army.