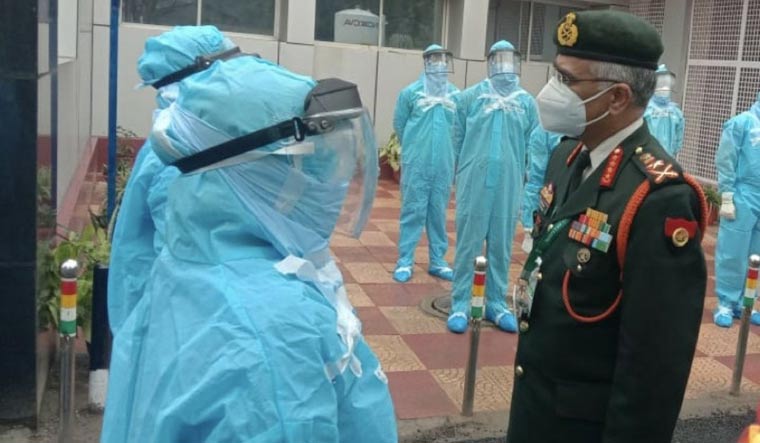 Last year, when the United States was battling with the surge of COVID-19 cases, its military docked two naval warships—USNS Mercy and USNS Comfort—on the coasts of New York and Los Angeles. Similarly, France had triggered 'Operation Resilience' to respond to the outbreak by involving large number of military personnel. The Great Britain also launched its biggest ever homeland military operations in peacetime to assist overwhelmed local hospitals treating patients. More controversially, in some parts of Europe, troops were deployed to enforce mandatory lock-downs by patrolling the streets, constructing roadblocks and curbing movement.

Here, in India, from warplanes to warships, armed forces are being deployed to combat the catastrophic second wave of the pandemic. Besides bringing critical medical oxygen and other lifesaving equipments, Indian military has built multiple make-shift field hospitals.

With record number of new COVID-19 patients, the country is facing shortage of medical facilities like hospital, medical oxygen and medical staff.

It is indeed a war-like situation except this time enemy is not China or Pakistan but rather an invisible virus. And experts believe that there is only a minuscule percentage of their (military) capability has been put to use. Only the military health resources (Army medical corps) have been fully engaged and, there are other capacities available with military and those are not being fully utilised. Less than one-tenth capacity of the armed forces is being engaged.

For example, during 2014 flood in Jammu and Kashmir, Indian Army not only provided relief and rescue to the general public, but also made the then chief minister of state, Omar Abdullah to speak to his officials by using military communication network. The communication infrastructure was totally down because all towers were flooded.

Lt General D.S. Hooda, who was the northern army commander during J&K flood, has a fair idea of what a military can do in the time of health crisis. "While military health resources are fully committed to assist civil administration, there are other expertise and capacities available with the armed forces that are not being fully tapped. Army has experts from other fields like engineering, infrastructure and logistics," Lt Gen Hooda told THE WEEK. During the massive earthquake in Jammu and Kashmir in 2005, Lt Gen Hooda also led the military rescue and relief efforts in the Uri sector.

In the UK, its armed forces were working on 70 different tasks, from testing in schools to the rollout of vaccines and to support organisational and logistical efforts. China has reportedly mobilized over thousands of military personnel and set a world record of setting up hospitals in Wuhan, the epicentre of COVID-19 pandemic, in five days.

India’s armed forces have 1.5 million trained personnel deployed all over the country and, by now, they all are COVID vaccinated. Some feel that the reluctance on part giving larger role to military could be a reflection on government's inability to deal with the situation.

But, General Deepak Kapoor, former Army Chief has a different take. He said that if the primary role of the military has been maintained and there is surplus capacity, then it should be roped in. While not in support of giving larger role to military, he said "You would not expect, especially when crisis in Eastern Ladakh has been fully resolved. And summer season is approaching, and there is a possibility of repeat of Chinese misadventure. We need to tackle the Chinese as well on the border."

In the past, the military has been on the forefront in relief and rescue operations during natural calamities like flood, cyclone and earthquake. Military experts claim that the fight against COVID-19 should be treated as a warlike situation. And every action has to be taken according to the Union War Book. The ‘War Book’ documents the role of each ministry at the time of war.

Some believe that COVID is not only a medical emergency, as it is also a supply and logistic as well information emergency. And the military is equipped to create infrastructure in war footing.

Military engineering services can be used to bring up the capacity of oxygen generation along with creating additional make-shift hospitals and dispensaries. Its strength of over 2000 officers can quickly set up the required infrastructure in short deadline in every place around the country. Even a cricket stadium can be converted into a make-shift hospital, if required.

Meanwhile, combat engineers can be used for creation of structures like Corps of Signals units which will be handy for managing information like setting up emergency command and control room to track the movement of essentials in addition to the civil administration.

On the medical side, the Army has an all-India network of medical store depots that can be used to supply of critical medicine to assist civil administration. “We deliver medicine to our forward most areas, even high altitude Siachen, with a strong supply chain. The Army Medical Corps does carriage of these medicines,” an official said. The official believes that with this, shortage of critical medicine can be handled to some extent.

In addition, military has a huge logistic network with trained manpower. Army has a pan-India movement control network mechanism. And it can be used to track medical supplies. Movement Control Office (MCO) is responsible for assisting in planning, coordination and control of military movements in support of operations, exercises and administrative deployments across the country. "It can also be used in tracking critical medical supplies. It is a complete transparent method," Lt Gen Hooda said while suggesting a unified command and control centre. Moreover, Army Service Corps has a large number of vehicles and transportation, which can be used for system and logistic support for a dedicated supply chain. Engineers from EME Corps can be utilised for repair and maintenance of heavy medical equipment.

In order to handle oxygen crisis, military officials believe that there could be a National Control Centre to streamline supply of oxygen. As per logistics principle, whenever there is scarcity of something, there should be a centralised control on it.

“From oxygen plant to movement of container, every movement can be tracked through check post in the dedicated route,” the officer said.

No one can forget incidents of Mumbai's Elphinstone Road railway footover bridge collapse and 2010 Commonwealth games bridge collapse, where Army came into the rescue and built those bridges in record time.

With its pan-India presence, the Army can help civil administration provide the ground situation in remote areas with number of COVID-19 affected cases and available medical facilities.

Following the UK model of testing and vaccination, the military can be roped in for the inaccessible remote areas. Thousands of British soldiers were supporting community testing. In India, with military's presence in far-flung areas of northeast to hilly Ladakh, it will play a major role in supporting the civil administration.

During multiple meeting with top military hierarchy, Defence Minister Rajnath Singh had conveyed that the armed forces need to pitch in a big way to assist the government in its fight against coronavirus, like the setting up of COVID facilities, transporting relief equipment and airlifting medical personnel within the country. While directing the armed forces to extend all possible assistance to the civil administration to tide over the crisis, Rajnath Singh also enhanced emergency financial powers to the forces.

The armed forces have approximately 13,000 officers (doctors and nursing officers) and one lakh medical support staff. But, only 600 medical personnel from the armed forces, including doctors, nursing staff and paramedics have been deployed in various COVID facilities run by the defence ministry across the country. More personnel need to be deployed in such centres. It is learnt that since the military hospitals are packed with patients that include serving personnel and their dependents, it is difficult to spare more hands for civil duties. Veteran officers and medical personnel can nearly double the existing resources. While calling medical officers from the frontline formations for their deployment in various COVID-19 hospitals and medical facilities, the government has given extension to the short service commission doctors in the Armed Forces Medical Services, who are due for retirement.

The Indian Air Force carried out  534 sorties from various parts of the country and 84 international sorties to transport cryogenic oxygen storage containers and other medical equipments. The medical equipment has been procured from Singapore, Dubai, Thailand, United Kingdom, Germany, Belgium, Australia, Indonesia and Israel.

It’s not just the IAF, but the Indian Navy, too, is part of mission oxygen now. Nine Indian Navy warships have been deployed for the purpose and bring medical supplies.

Close to 750 beds in various military hospitals have been set aside for civilian use. The AFMS (armed forces medical services) has also dedicated 19 hospitals, over 4,000 beds and 585 ICU units across the country. More COVID health care facilities and hospitals are being made regularly—a 150-bed hospital has been set up in the hostel of Punjab University by the Western Command.

The DRDO has constructed four COVID hospitals in Delhi, Ahmedabad, Lucknow and Varanasi. Incidentally, except the one in Delhi, all three have been set up in the parliamentary constituencies of the prime minister, the Union home minister and the defence minister. Besides, defence scientists from DRDO's Nuclear Medicine and Allied Sciences (INMAS) have developed an anti-COVID therapeutic application of the drug 2-deoxy-D-glucose (2-DG).

Now, with the apprehension of third wave of COVID, requirement of medical facilities is going to multiple. And, using military along with civil administration can play a critical role in India's fight against the pandemic.

Major General Shashi Asthana (Retd), former Director, Operations and Logistics in the Army headquarters, says that the pandemic will have to be fought like war. He says the Army has a strong logistic network as they do the six months of winter stocking for entire northern command. From a pair of socks to ammunition, the Army logistics provides everything on time.

"While the military is engaged in large numbers, there is also a scope to incorporate logistics expertise of the armed forces in crisis management to improve the supply chain," Asthana said, adding that engineering resources of military can divert manufacturing assembly lines of other gases to oxygen to overcome the oxygen crisis. While recommending to keep the defence services in the decision making loop, Maj Gen Asthana was equally apprehensive about the government's intention as currently the Indian military has no representation in any of the 11 empowered groups.

Last week, Delhi Deputy CM Manish Sisodia had written to Union Defence Minister Rajnath Singh to lend services of the armed forces to the state to help it set up, operationalise and run COVID health facilities with about 10,000 oxygen and 1,000 ICU beds along with transportation of medical oxygen. The Ministry of Defence, however, turned down Sisodia's request by saying they (military) are providing “as much help as possible” without compromising their operational readiness.

Calling military for help is also a double-edged sword, politically. Had any elected leader called its help, it would led to criticism from his or her opponents that the administration has failed to perform.

While suggesting that the Army should not take control of the situation, Lt Gen Hooda said, “It is not that the Army is a solution to every problem, but here you have a well-trained and disciplined military force. They can assist by carrying out testing and vaccination roll out to the areas with the Army's pan-India presence including remote and border areas."