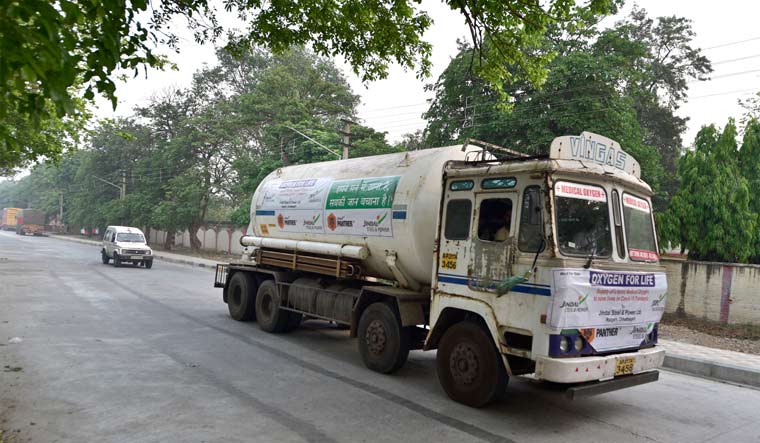 The Uttar Pradesh government has introduced a system to track the real-time location and status of oxygen tankers coming into the state, even as a PIL in the Allahabad High Court asked the government to stop taking coercive action against citizens who were flagging the lack of oxygen supply.

The state’s Additional Chief Secretary Avanish Kumar Awasthi said that UP was one of the first states in the country that had started an oxygen monitoring system. “A green tanker means one that is filled, a grey means one that is empty. This is a high technology monitoring system developed within 24 hours,” said Awasthi, demonstrating the system in Lucknow on Wednesday. Tankers plying between UP, Delhi and West Bengal are represented as dots on the tracking system.

At an earlier meeting with Team 11- the nodal team of officers managing the COVID-19 crisis - the chief minister directed that all help be given to those who were proposing to set up oxygen plants in the private sector.

“This will not only help in increasing oxygen production in the short run but will also be important to provide long term employment,” a media brief said.

In the Allahabad HC, activist Saket Gokhale filed a petition that said, “Filing criminal cases against families of critical patients issuing SOS calls for oxygen on social media is a gross misuse of the powers of the state.”

Medical suppliers in the capital told THE WEEK that much of the problem of oxygen supply had been created by senseless hoarding.

The director of a private hospital which has been designated for COVID-19 care said, “We have just one ambulance and it has to stand in queues waiting for oxygen refills for nearly 8-10 hours every day.”

UP has set up a control room with high level representation from the departments of food and drug, transport, medical, medical education, home and police departments.

“The control room”, said Awasthi “will be operational 24 hours. (It will) monitor oxygen supply to all districts of the state.”

At more than 850 metric tonnes, UP has received the maximum daily quota of oxygen supply from the centre. Tankers that were transporting nitrogen and argon are also being used for transport of the lifesaving gas, said Awasthi. “We are the first state to use the railways for nipping the turnaround time for oxygen supplies. We have also used the air force to send tankers from Ghaziabad to Ranchi,'' he added.

The state is also working to develop a system for oxygen audit. For this, a group of the directors of institutions including IIM Lucknow, IIT Kanpur, IT Banaras Hindu University, MNIT Prayaraj, HBTU Kanpur, AKTU Lucknow has been formed.