Lucknow police arrests gangs over black marketing of Remdesivir in UP 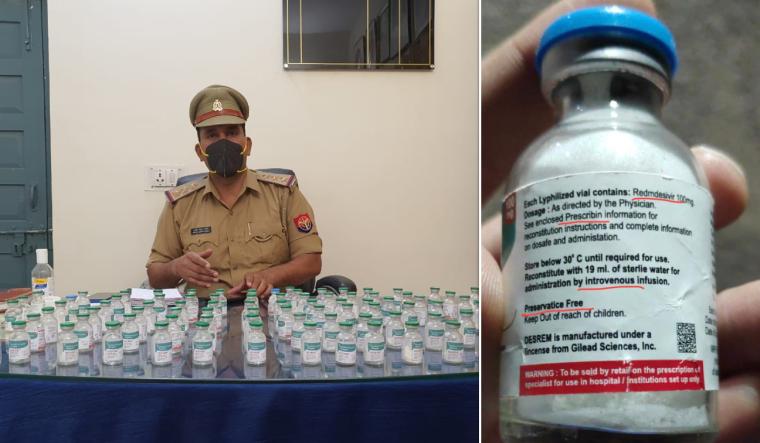 Lucknow Police seized Remdesivir vials which were to be sold in the black market; (right) Fake Remdesivir injection vials | Supplied

The Lucknow police on Friday made two arrests in connection with black marketing of Remdesivir injections in Uttar Pradesh.

In the first case, 116 injections were recovered from four youths, who were also carrying Rs 1.93 lakhs in cash and four mobile phones. In the second, two youth were arrested with 11 vials of the injection and Rs 39,000.

The first arrest was made in the city’s Naka Hindola area and the second at Aminabad. The latter has a wholesale medicine market. The accused will be face charges under the National Security Act, in addition to the Gangster Act.

According to a note issued by the police, “Many gangs are actively selling the injection at many times its cost. The police commissioner has instructed that strictest action be taken against such people.”

Lucknow has been facing an acute shortage of Remdesivir which is used to treat COVID-19. Despite varying opinion on the medical protocol on the efficacy of the injection, many with connections and resources are hoarding the medicine even as relatives of COVID-19 patients run around in search of it.

On April 15, the UP government sent a plane to pick up 25,000 vials of the medicine from Ahmedabad.

To cash in on the mounting helplessness of patients and the perception of Remdesivir as “the magic bullet”, fake injections are also being sold in the market. The stickers on these vials come with words like ‘prescribin’ (instead of prescription), ‘introvenous’ (instead of intravenous) and ‘preservactica’ (instead of preservative). Even the name of the drug is misspelt as ‘Redmdesivir’.

Doctors are divided on the effectiveness or even the necessity of Remdesivir for COVID-19 patients. Clinical studies have shown that the injection does not prevent death.

Even patients who are recovering from COVID-19 after receiving the injection have shown severe lung damage. Anurag Bhaskar, a teacher of law said, “We could get Remdesivir after much struggle for my aunt. Even though she is recovering she has extensive lung damage and is unable to breathe without external support.”

A doctor told THE WEEK, “The government should be told that the time for fancy things is over. Only oxygen, dexamethasone and enoxaparin are needed, and patients can then be treated and saved even on makeshift beds.”

Dexamethasone is used for its anti-inflammatory and immune-suppressant properties. Enoxaparin prevents the formation of blood clots.