Police arrest couple for misbehaving with cops in Delhi's Daryaganj 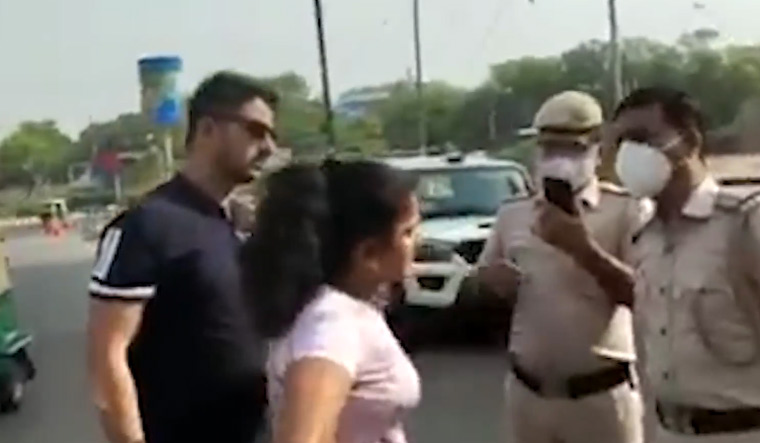 In a video shared on social media, the couple could be seen misbehaving with Delhi police personnel when they were asked the reason for not wearing masks | Screengrab

A man and his wife were arrested after they allegedly misbehaved with policemen when they were stopped for not wearing masks in central Delhi's Daryaganj, officials said on Monday.

A purported video of the incident was shared on social media platforms, wherein the couple could be seen misbehaving with Delhi police personnel when they were asked the reason for not wearing masks.

Police said they registered a case against Pankaj, a marketing salesman, and his wife Abha, residents of Patel Nagar in central Delhi.

''The husband-wife who refused to wear mask and misbehaved with police personnel of Daryaganj police station during the weekend curfew and further obstructed them in discharging their duties have been booked and arrested,'' tweeted Deputy Commissioner of Police (Central) Jasmeet Singh from his official Twitter handle.

''During interrogation, the man put the blame on his wife and told police that his wife does not wear mask and also does not let him wear one. However, he claimed that whenever she is not around, he always wears a mask,'' a senior police officer said.

The woman, however, claimed during interrogation that she does not wear a mask because of breathing problem, he said.

Delhi has been witnessing a massive surge in coronavirus cases in the past few days.

According to the police, the incident took place at on Sunday.

The couple, travelling in a car, misbehaved with the policemen when they were stopped and asked the reason for not wearing mask. The woman also said they would not pay fine and started arguing with them, police said.

They did not have any movement passes andchallenged the policemen how they could dare to stop their car. They started misbehaving, hurling abuses and provoking the policemen on duty.The couple also obstructed police personnel in discharging their duty, a senior police officer said.

However, despite such aggressive and provocative behaviour, the policemen remained patient and calm, he said.

Later, they were taken to Daryaganj police station where they were provided masks and made to wear them as well, police had said.

"The two law violators have been arrested under section 186 (voluntarily obstructing public servant in discharge of public function), 188 (disobedience of order promulgated by public servant), section 269 (unlawfully or negligently does any act which likely to spread the infection or disease), section 353 (assault or use of criminal force against public servant in the execution of his duty) of the IPC read with section 51-B of Delhi Disaster Management Act,"said Chinmoy Biswal, PRO, Delhi Police.

They were produced before a court on Monday and have been sent to judicial custody," he said.

"Citizens are requested not to violate COVID guidelines and lawful directions, as it is necessary to take effective measures to prevent the spread of coronavirus in larger public interest," he added.