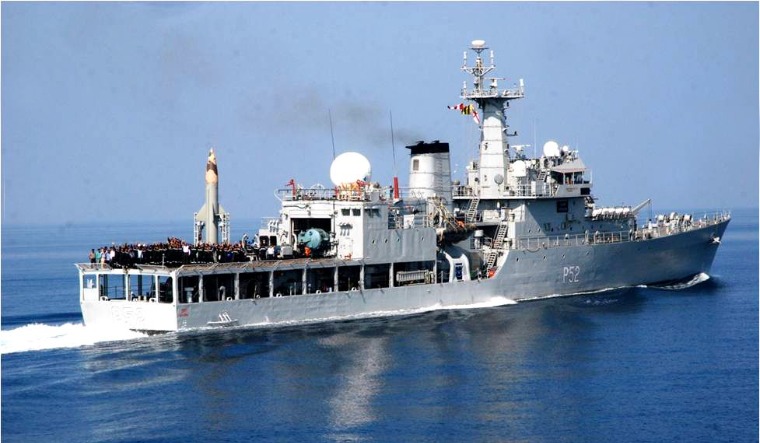 In a major seizure, an Indian Navy ship has recovered more than 300kg of narcotics materials from a fishing vessel in the Arabian Sea.

A press release from the Indian Navy on Monday stated the INS Suvarna was on surveillance patrol in the Arabian Sea when it encountered a fishing vessel that was moving suspiciously.

The ship’s crew conducted a board-and-search operation of the fishing vessel, resulting in seizure of more than 300kg of narcotics substances. The Indian Navy announced the fishing vessel and its five-member crew, all of them hailing from Sri Lanka, had been taken to Kochi, the nearest port, for investigation. The Indian Navy stated the approximate value of the seized narcotics on the international market was estimated to be Rs 3,000 crore.

Highlighting the significance of the seizure, the Indian Navy stated, “This is a major catch not only in terms of the quantity and cost but also from the perspective of disruption of the illegal narcotics smuggling routes, which emanate from the Makran coast and flow towards the Indian, Maldivian and Sri Lankan destinations.” The Makran coast, which lies in the territories of Pakistan and Iran, is considered a major hub of drug smuggling.

According to the Navy, the contraband originates from Makran coast in Pakistan.

The Indian Navy noted, “Apart from the human costs from drug addiction, the spoils of narcotics trade feed syndicates involved in terrorism, radicalisation and criminal activities.”

The INS Suvarna is an ‘offshore patrol vessel’ that was commissioned into the Indian Navy in 1990. The Suvarna was based on a South Korean naval design.

The Suvarna and other OPVs are relatively lightly armed, compared with other warships, and are meant for missions such as coastal and offshore patrolling, ocean surveillance and monitoring of sea lines of communication, humanitarian assistance and disaster relief (HADR) and escort duties.

The INS Suvarna was modified to test-fire the Dhanush, a variant of the Prithvi ballistic missile.