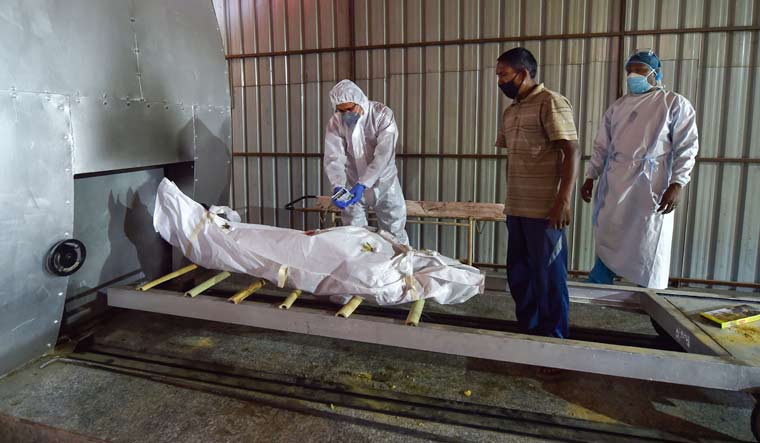 Representational image of a crematorium in Delhi | PTI

Chidambaram cited a report in The Hindu that said 689 bodies had been cremated in seven cities of Gujarat using the COVID-19 protocol.

Chidambaram tweeted, "While Gujarat officially reported 78 Covid-caused deaths on Friday (17th April), the HINDU reported that 689 bodies were cremated in 7 cities alone following the Covid protocol." Chidambaram alleged COVID-19 deaths were being misreported as being caused by cardiac arrest, chronic diabetes and so forth and hit out at the 'Gujarat model'. The 'Gujarat model' was a term popularised by the BJP and Prime Minister Narendra Modi to highlight the latter's successes when he was chief minister of the western state from 2001 to 2014.

The Hindu had reported on Sunday that "on April 16, as per the State health bulletin, total deaths were 78. But from seven cities—Ahmedabad, Surat, Rajkot, Vadodara, Gandhinagar, Jamnagar and Bhavnagar—689 bodies were either cremated or buried following COVID-19 protocols on the disposal of bodies".

"The State, overwhelmed by the second wave of the pandemic, is witnessing a tale of two sets of data: one from by the Health Department and the other emerging from hospitals and crematoria/burial grounds. And there is a massive mismatch between the numbers," The Hindu added.

On Sunday, Gujarat recorded its highest-ever spike in COVID-19 cases, reporting 10,340 cases. The daily figure of deaths was also the highest, at 110 fatalities. The figures took the total number of COVID-19 cases to 4,04,569 and death toll to 5,377. The number of active cases in Gujarat as of Sunday night was 61,647.