End of road for Viraat? SC rules dismantling of aircraft carrier can go on 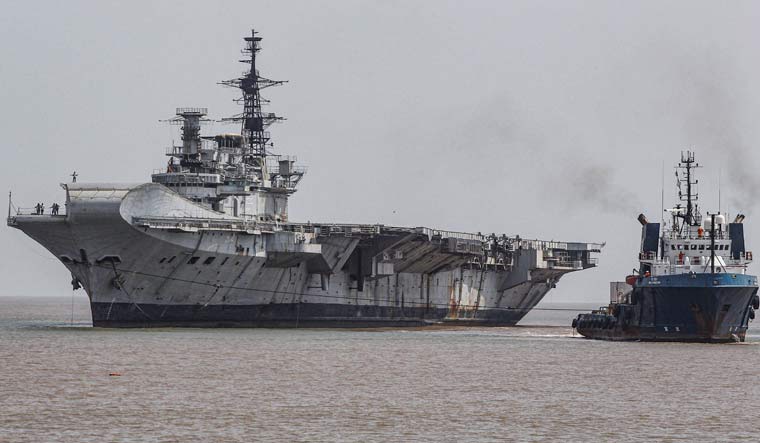 The Viraat, which served the Indian Navy for over 30 years, was India's flagship for over two decades. The ship was decommissioned in 2017. Despite proposals by state governments and private firms to preserve the vessel, the ship was towed away to a ship-breaking yard in Gujarat in September last year for dismantling into scrap.

The Supreme Court had ordered status quo on the dismantling of the vessel in February on a plea from Envitech Marine Consultants Pvt Ltd, which said it wanted to preserve the ship as a maritime museum.

On Monday, a Supreme Court bench led by Chief Justice of India S.A. Bobde noted dismantling of the ship had already begun, and the ministry of defence had also refused a request from Envitech to take possession of the vessel for conversion into a maritime museum.

“We are with you as far as the spirit of nationalism is concerned, but you are already too late in this case. 40 per cent of the ship has been dismantled. We cannot interfere now," Bobde was quoted as saying by Live Law.

Last week, while hearing the matter, the Supreme Court observed the Viraat was now the property of the Shree Ram group, which had acquired the ship for scrap. The Supreme Court had then also noted Envitech had approached the apex court "too late". The bench also comprised Justices A.S. Bopanna and V. Ramasubramanian.

Envitech was working with a UK-based trust, the Hermes Viraat Heritage Trust, which had sought to preserve the ship. Before being purchased by the Indian Navy, the Viraat was part of the British Royal Navy and was the flagship of the British fleet that liberated the Falkland Islands in the 1982 war with Argentina.

Envitech had argued it could repair the ship even if 40 per cent of it was dismantled. NDTV reported, "The company had made detailed plans for its conversion into a 'major heritage site' with a naval and marine aviation museum, multi-functional centre involving marine adventure, career development and business hub."

Envitech had hoped to buy the ship from Shree Ram for around Rs 110 crore.

David Campbell Bannerman, a former member of the European Parliament from Britain, had backed the efforts of the Hermes Viraat Heritage Trust to save the ship. Bannerman had also sought intervention of British Prime Minister Boris Johnson in the matter.