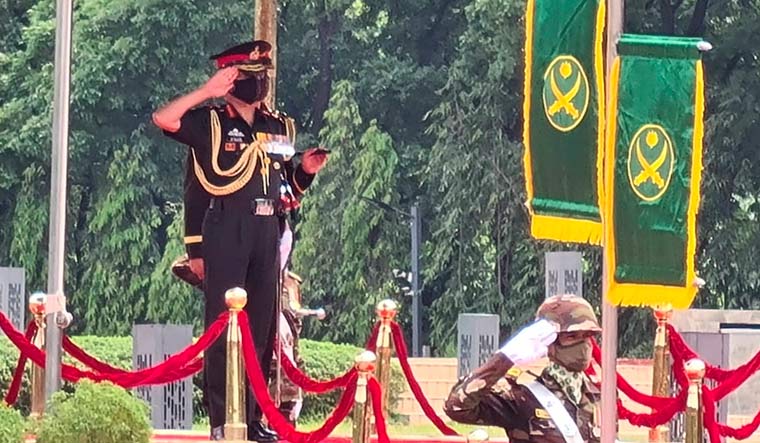 Naravane also paid tributes to the fallen heroes of Bangladesh's 1971 Liberation War after arriving in the country on a five-day visit to further strengthen the close and fraternal ties existing between the Armed Forces of the two nations.

The visit of Naravane, who is here at the invitation of his Bangladeshi counterpart Gen Aziz Ahmed, comes less than two weeks after Prime Minister Narendra Modi travelled to the neighbouring country.

After his interaction with Admiral Iqbal, the Indian Army chief met the country's acting Chief of Air Staff of Bangladesh Air Force.

It said that the Indian Army chief called on his Bangladeshi counterpart Gen Aziz Ahmed.

During the meeting between the two Chief of Armed Forces, strengthening of bilateral defence cooperation and strategic ties between two countries were discussed, the ADG PI said.

The Indian High Commission here said that Gen Naravane called on his counterparts and other senior officers to discuss matters of mutual cooperation.

The visit by Indian Army Chief will strengthen the close and fraternal ties existing between the Armed Forces of the two countries, it said.

During the day, Gen Naravane gifted a replica of T-55 Tank and a picture of 75/24 mm Howitzer, a field artillery.

The original equipment are being gifted for museums of Bangladesh. Both T-55 Tank and 75/24 mm Howitzer played a stellar role in the 1971 War of Liberation, the ADG PI said on Twitter.

Meanwhile, a multi-national military exercise is in progress at Bangabandhu Senanibas in Bangladesh.

After his arrival here, Gen Narawane paid tribute to the fallen heroes of the 1971 Liberation War by laying a wreath at the altar of Shikha Anirban in Dhaka Cantonment.

"Gen Narawane on 1st day of his 5-day visit to #Bangladesh paid tributes to the martyrs of the Liberation War at the #ShikhaAnirban today," the ADG PI said.

He was welcomed with a guard of honour at Senakunj.

He will also be visiting various military stations in Bangladesh.

The Indian Army chief will share his experience during the seminar on United Nations Peace Support Operations. He will also witness the culmination exercise, hardware display and closing ceremony of the joint military exercise 'Shantir Ogroshena', a multilateral UN-mandated counter-terrorism exercise from April 4 to 12.

The year 2021 marks the 50th anniversary of diplomatic relations between India and Bangladesh, the liberation of Bangladesh from Pakistan and the birth centenary of 'Bangabandhu' Sheikh Mujibur Rahman.