Choudhary said Maoists are willing to talk, and govt should seize the opportunity 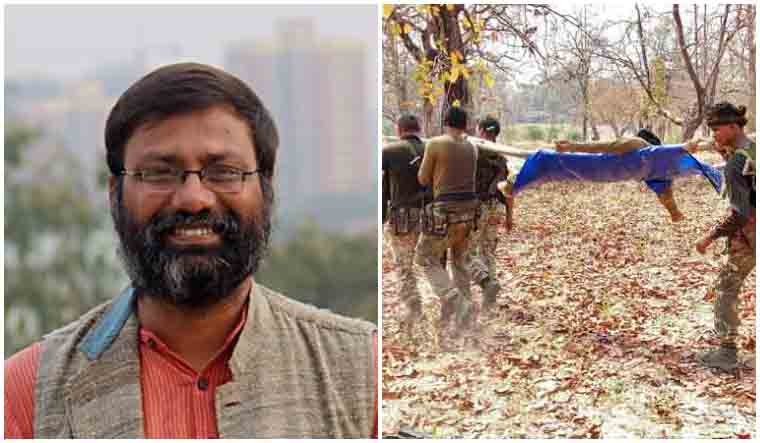 Shubhranshu Choudhary; (right) security personnel carry the body of their colleague after an attack by Maoists in Bijapur in Chhattisgarh | Reuters

In an open letter to the Maoists, Shubhranshu Choudhary, the convener of The New Peace Process – an initiative for peace in Maoism-hit central India – has urged them to rethink the strategy of violence in people's war.

Choudhary has written the open letter after the Maoists, through a press statement issued on April 5, asked him to respond to the alleged path of violence and oppression chosen by Chhattisgarh Chief Minister Bhupesh Baghel, despite them making a conditional offer of peace talk.

The conditional peace talk offered by the Maoists had been made on March 12 after a foot march for peace under the New Peace Process initiative started from Narayanpur in Bastar to Raipur in Chhattisgarh. In response, Baghel had said that there could be no conditions for talks and Maoists should give up arms before talks could be initiated. The Maoists have alluded to these developments while seeking response from Choudhary on April 5.

In the open response letter, Choudhary said, “Maoism is an uninvited guest in Bastar. You (Maoists) have helped people of Bastar by giving them their forest back temporarily. They have also sacrificed a lot for your dream of making a better world. But the current form of your experiment will destroy Bastar.”

“Most of you Maoist leaders have left your homes to come to the jungle to make this world a better place. Like Vijay, I have respect for your commitments but today when central India is on the path of becoming Afghanistan, I hope you will rethink your strategy.”

Later, speaking to THE WEEK, Choudhary said that even after the ambush that killed 22 security personnel in Bijapur on April 3, the Maoists seem to be hinting at willingness to engage in peace talks, given the allusions made in the press statements and the way they are trying to get government to appoint mediators to secure release of the CoBRA personnel, allegedly, in their captivity.

In the statement released on April 6, the Maoists had again said that they were always ready for peace talks, but the government was not sincere on the issue. They had said that never had arms been laid down by those engaged in armed struggle before the beginning of peace talks and it was the responsibility of the government to make a conducive environment for the same. Talks are possible if actions like concentrating armed forces, setting up camps, launching attacks and oppressive measures are given up by the government, the statement had said.

"The state government should be imaginative and take this opportunity to break the ice, else the cycle of violence will only continue,” Choudhary said.

Meanwhile, in his open letter, Choudhary has detailed his understanding and witnessing of the Maoist issue since he was a university student in Raipur in 1988 and first came in contact with Maoist leaders.

“In 2004, when I came back to Raipur, I found the government running a violent campaign to crush Maoist movement and there was almost nothing getting reported. I started writing about the human rights violations and wrote almost every week.

“My understanding about the Maoist party has been that you had not come here to do revolution. You came here to hide. As per that “rear area” strategy you helped tribals get better Tendu leaf rates and against the atrocities of forest, police, revenue departments and businessmen. And after 1990, when the BJP government started a violent Jan Jagran Abhiyan (people’s awakening campaign), then only adivasis were forced to join the party (Maoism),” Choudhary said in the letter.

He also underlined how, from writing on human rights violations and wrong government policies, he came about to attempt 'democratisation of media' through a mobile community radio to bridge the communication gap of the Bastar locals with the country at large.

For this, work on Gondi language was also started as most of the local Maoists were only conversant in that language. “It was around 2014-15, in our Gondi workshops, people started demanding that we start work for peace. They said Maoists are better than policemen but their ideology will harm our society more in the long run, so, we want to come out of it,” Choudhary said in the letter.

He said that despite avoiding it for a few years, the growing demand for initiating peace among locals and other supporters led him to launch the New Peace Process in 2018 where tribals mainly from Andhra Pradesh and Telangana participated in a meeting seeking help for brethren in Chhattisgarh, who they said were in trouble.

This was followed by a mobile opinion poll in October 2020, where 92 per cent of people came out in favour of resolving the issue through peaceful dialogue. “To take that demand forward, we did a foot march from Maoist headquarters to the state capital in March 2021,” Choudhary said further in the letter.

Choudhary went on to say that it was noticed that “governments had started encouraging some anti-constitutional work in tribal areas of Bastar, which cannot be supported. But, at the same time, opposition by people who also indulge in violent activities is also not acceptable.”

He also said that the government has now started work on some pro-tribal laws, release of prisoners and better rates of forest products, though half-heartedly. But Maoists are killing more people by calling them informers and expelling them from their villages.

In their election manifesto, Congress had promised for “a policy and serious efforts for talks” to resolve the Maoist problem. We hope that Congress will fulfil its commitment and Maoists will help,” the letter said.

“After 2004, when I met some of you to write a book on your movement and you asked me about my politics, I had replied that my commitment is only to the larger people and I was glad that you had respected my opinion. I remain the same.

“Today, people in forests of central India want peace with justice. The same people who had no “political consciousness” are now fighters, thanks to you. Please help them a bit more so they can fight democratically and get all their rights,” the letter said.