'Deplorable attempts to spread panic': Centre lashes out at states over vaccination

A few states are trying to distract attention from their failures, says Harsh Vardhan 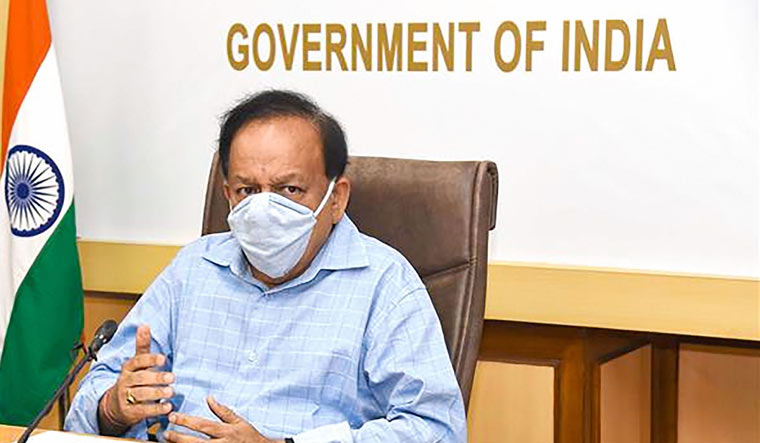 Union Health Minister Dr Harsh Vardhan has lashed out at certain state governments for their “deplorable attempts'' to create false narratives around the COVID-19 vaccination programme and to “distract attention from their failures and spread panic among people''.

In a rare move, the mild mannered minister released a statement criticising Maharashtra, Delhi and Punjab for their inadequate record with vaccination and the “irresponsible statements” that “have the potential to mislead the public and spread panic''. All these three states are run by non-BJP governments.

“I am constrained to speak out now because my silence should not be misconstrued for weakness. Playing politics is easy, but improving governance and health infrastructure is the real test,'' he said.

Vardhan said that a section of political leaders have demanded that vaccination be opened up for everyone above the age of 18, or at least the age of eligibility for vaccination be reduced drastically. “So long as the supply of vaccines remains limited, there is no option but to prioritise. This is also the established practice around the world, and is well known to state governments,'' he said, pointing out that India had launched the world's largest vaccination programme and was providing the vaccine free of charge to all above 45, at government centres.

When the states ask to open up vaccine supplies to everyone over 18, we must presume that they have done saturation coverage of healthcare workers, frontline workers and senior citizens. But the facts are altogether different, the minister pointed out. He said that Maharashtra has vaccinated just 86 per cent of health workers with the first dose, Delhi 72 per cent and Punjab 62 per cent.

Hitting out at the Maharashtra government in particular, Vardhan said that the claims by the state politicians that there is a vaccine shortage is nothing but an attempt to divert attention from the state's “repeated failures” to control the spread of the pandemic.

“The inability of Maharashtra government to act responsibly is beyond comprehension. To spread panic among the people is to compound the folly further. Vaccine supplies are being monitored on a real time basis and state governments are being apprised regularly about it. Allegations of vaccine shortage are utterly baseless,'' he said.

Vardhan added: “Throughout last year, as the health minister of India, I have been a witness to the misgovernance and utter casual approach of Maharashtra government in battling the virus. The lackadaisical attitude of the state government has singularly bogged down the entire country's efforts to fight the virus. We in the central government, have regularly counselled the Maharashtra state government, made them available all resources and sent central teams for help. However, the lack of efforts on the part of the state government is now clearly visible and come to haunt us all. Today Maharasthra not only has the highest cases and deaths in the country, but also has one of the highest test positivity rates in the word. Their testing is not upto the mark and their contact tracing leaves a lot to be desired.'' The minister said it was shocking how the state government was letting people escape institutional quarantine for the sake of their “personal Vasuli''.

He also highlighted Chhattisgarh in his attack, noting the high deaths and low testing. He said Chhattisgarh government had refused to use Covaxin despite it being given emergency use authorisation. “The leaders of this state government have the dubious distinction of being perhaps the only government in the world to have incited vaccine hesitancy,'' he said. Vardhan noted that states like Karnataka, Rajasthan, Gujarat and Punjab also needed to bring their healthcare systems upto the mark.

Meanwhile, Information and Broadcasting Minister Prakash Javadekar said the Maharashtra government should not play politics over vaccination, adding that the Centre replenishes more vaccines than what is needed for actual use.