In letter, Mamata voiced "serious concerns over a series of assaults" by BJP, Centre 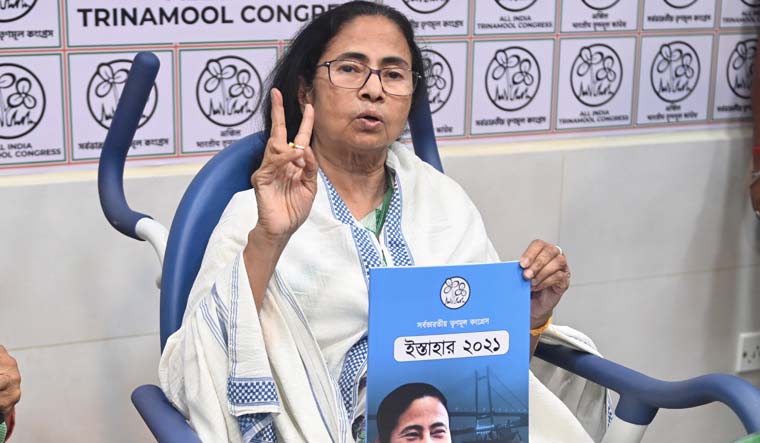 With her personal political fate to be decided on Thursday when polling is held in Nandigram, West Bengal Chief Minister Mamata Banerjee has reached out to opposition leaders to build a united front against the BJP.

In the letter, Mamata expresses "serious concerns over a series of assaults" by the BJP and the Central government on "democracy and constitutional federalism".

Mamata referred to the recent passage of the National Capital Territory of Delhi (Amendment) Bill by Parliament as an "extremely grave development". Mamata claimed the new law would make the lieutenant governor an "undeclared viceroy of Delhi", who would be acting as a proxy of the home minister and prime minister.

Describing the new law as a "direct attack on the federal structure", Mamata claimed it "makes a mockery of the letter and spirit of democracy". Mamata argued what the "BJP has done in Delhi was not an exception, but increasingly... rule".

Mamata also raised several key issues, including the "misusing" of the office of the governor in opposition-ruled states, "vindictive misusing" of the CBI and ED against non-BJP parties, Narendra Modi government withholding transfer of funds to state governments and BJP's accumulation of funds from questionable sources.

Mamata claimed "Centre-state relations, as also relations between ruling party at Centre and opposition parties, have never been as bad in the history of independent India as they are now and the blame for this rests squarely with the prime minister's authoritarian conduct.”

Mamata alleged the BJP wanted to dilute power of state governments and "downgrade them to mere municipalities” in order to establish "one-party authoritarian rule in the country”.

Calling for a "credible alternative" to the BJP, Mamata said the time has come for a "united and effective struggle against the BJP's attacks on democracy and the Constitution".