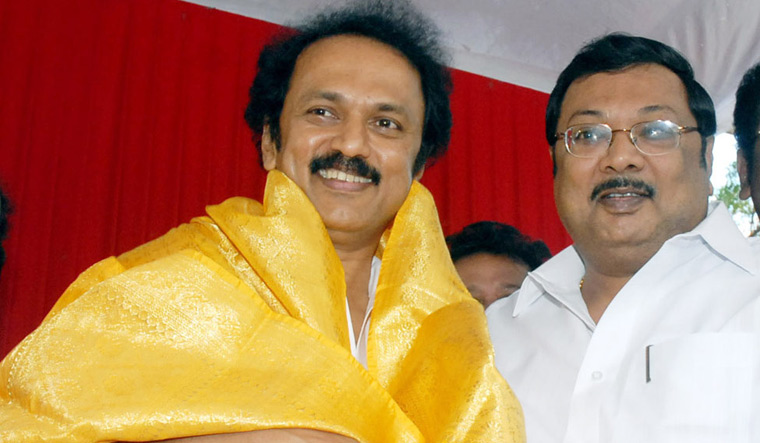 Setting aside all his differences, former union minister and elder brother of chief minister designate M.K. Stalin, M.K. Alagiri, on Thursday, wished his "younger brother" for his victory in the elections.

"I wish my younger brother MK Stalin. I am proud of my younger brother who is to be sworn in as the chief minister. DMK president MK Stalin will definitely give a good governance," Alagiri tweeted from his official twitter handle @MKAlagiri_offl on Thursday.

Alagiri's statement came four days after the DMK won comfortably in the Tamil Nadu assembly elections. Alagiri had once even refused to acknowledge Stalin even as the DMK party leader. Immediately after DMK's victory on May 2, Alagiri posted a video of DMK's black and white flag flying high, on his Facebook page, but did not congratulate anyone.

However, Alagiri's congratulatory message to Stalin seems to have answered several questions on the sibling rivalry. Alagiri was expelled by the party by his father M. Karunanidhi soon after the 2014 election debacle. But Alagiri chose to stay away from the party after Karunanidhi's death, except for a few meetings with his supporters. Months before the elections, rumours of Alagiri floating a party and supporting BJP did the rounds. But Alagiri called a meeting with his supporters only to say "Stalin cannot become the chief minister of Tamil Nadu". Though he said he will announce his political plans by the end of January 2021, Alagiri remained silent.

Sources say that the members of the DMK first family, including Alagiri’s sister Selvi, and senior leaders like Durai Murugan convinced him saying that anyone from the family joining or supporting BJP will be like ridiculing Karunanidhi.

Alagiri’s tweet today comes as a surprise in the political circles of Tamil Nadu. He said that due to the prevailing COVID-19 pandemic, he had preferred to remain at home and that his son and daughter may attend the swearing-in, to be held at Raj Bhavan on Friday.

It may be recalled that Stalin's son Udhayanidhi, who won from the Chepauk-Triplicane constituency, personally called on the family members, including Kanimozhi and her mother Rajathi Ammal, Stalin's brother M.K. Thamizharasu, to seek their blessings.