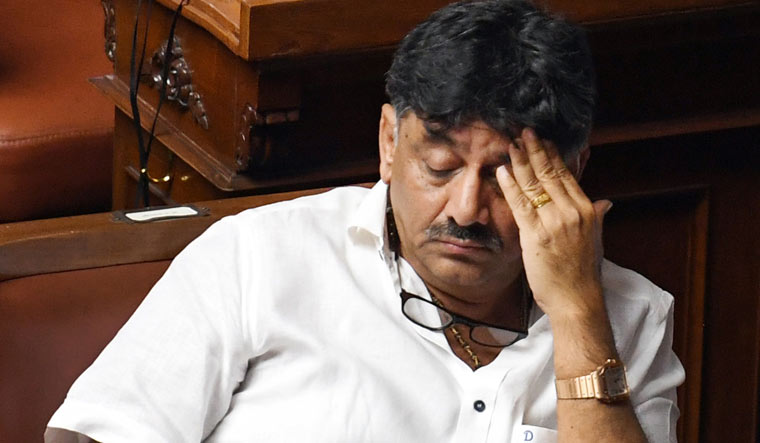 A day after the woman in the sex CD filed a complaint against former Karnataka minister Ramesh Jarkiholi alleging rape, the case got a new twist, with the parents of the woman appearing before the Special Investigation Team probing the case in Bengaluru on Saturday, and accusing KPCC chief D.K. Shivakumar for the scandal.

"D.K. Shivakumar is behind this CD. I urge him not to use my daughter to play his dirty political games. They are misusing a dalit girl for their personal gain," said the woman's father, an ex-serviceman, while speaking to the media after the SIT interrogation.

The younger brother of the woman dared Shivakumar to send back his sister and fight his political games on his own strength. "DKS is behind this scandal. He has used my sister to make the video. My sister told me he even gave her money and sent her to Goa (to hide). We have 11 audio recordings to prove this. We have given all the evidence to SIT," said the brother, who was accompanied by his parents.

"My father has protected the country [as a soldier]. Do you think he is incapable of protecting his daughter? I want my sister to be released immediately," he added.

A distraught mother appealed to her daughter to come out of hiding. "We are all safe. Nobody is threatening us. You don't worry about anything. Please come back to us," said the mother, reiterating Shivakumar had held her daughter hostage.

A few minutes after the parents addressed the media, Jarkiholi, in a separate press meet at his Sadashivanagar residence, thanked the parents of the girl for "exposing" the Congress leader. "The mahanayaka (Shivakumar) has a criminal mind. He has misused an ST girl and he should be booked under the Atrocities Act. He is a g****u (impotent). I am the real man. I have 11 evidences, which I will submit to the SIT," said Jarkiholi, once again vowing to "finish" Shivakumar's political career.

Shivakumar, who had admitted that he knew the kingpin (Naresh Gowda) as he was a journalist, had added that the woman had tried to meet him seeking his help but the meeting never happened.

In the evening, after the parents gave their statement to the SIT, Shivakumar told the media that he was in no way related to the case. "It is Jarkiholi's personal problem. He is under pressure, and he is frustrated. So, he will keep making statements. I am not prepared to go on replying to him every day. There is law, SIT, they will probe it," he said.

Meanwhile, the Congress party has demanded the arrest of Jarkiholi. The BJP government is following the "UP model" by providing security to the rape accused instead of arresting him. “Jarkiholi's (foul) language is only reflection of the BJP culture,” tweeted the Karnataka Congress.