In poll-bound Assam, Modi accuses Congress of siding with a party that promotes infiltration 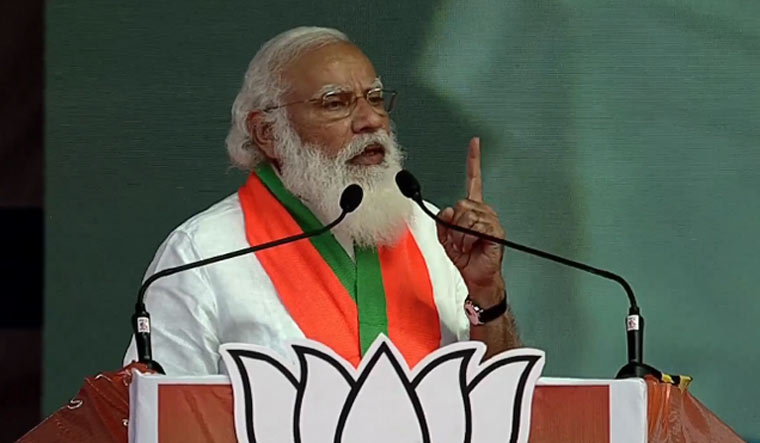 Taking a dig at the Congress-AIUDF alliance in Assam, Prime Minister Narendra Modi, who was addressing a campaign rally at Bihpuria, said the alliance aims to destroy the identify of the state.

Alleging that the Congress is taking the help from a party that promotes infiltration in the state, the prime minister said the grand old party does anything to win votes. This is not Mahajot, (grand alliance), but Mahajhoot (big lie), he added. He pointed out that the Congress, while abusing the Left in Kerala, has joined forces with the Left in Assam for votes.

The Congress, which was in power for 15 years in Assam since 2001, has formed a 'Grand Alliance' with AIUDF, BPF, CPI, CPI(M), CPI(ML), Anchalik Gana Morcha (AGM), RJD and Jimochayan (Deori) Peoples Party (JPP) to fight the upcoming assembly election against the BJP-led NDA.

Modi said the Congress-All India United Democratic Front alliance does not have any leadership or specific rules but guarantees only corruption and infiltration. He added that the NDA government has taken several steps to seal international borders to check infiltration.

The prime minister promised to implement decisions to better the lives of tea workers and added that while the Congress could not even raise the wage of workers to Rs 100, the NDA increased the wages two times in five years.

Assam will go to polls in three phases—March 27, April 1 and April 6, while the votes will be counted on May 2.