Questions arise over who hit whom in controversial delivery 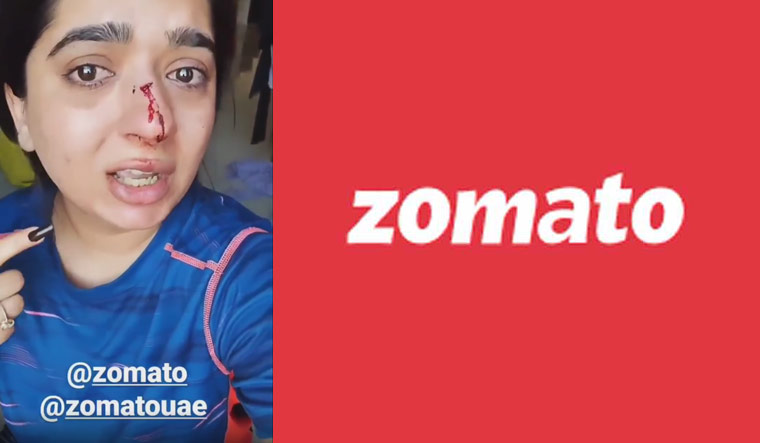 Just a day after the second first information report (FIR) was registered in the case between a Bengaluru-based influencer and the Zomato delivery executive she alleges hit her and left her bleeding, the woman in question , Hitesha Chandranee, has left the city according to reports.

On Monday, Kamaraj, the delivery man, filed an FIR against Chandranee alleging she hit him first. Today, city police say that when they visited Chandranee’s flat, nobody was at home, The News Minute reported.

The news website quoted sources saying police officials heard from her, saying she felt afraid staying at her home. Reportedly, Chandranee’s address had been leaked online, as the case ended up becoming a social media trial with several supporting Kamaraj against her.

In fact, searching for Chandranee’s account on Instagram yields several search results of fake accounts created in Chandranee’s name with abusive language used against her.

The New Indian Express reported Electronics City police saying she had left Bengaluru and is in her aunt’s house in Maharashtra. “We have given her time to make her statement once she returns, and the investigation will continue. If she fails to come before police, we will arrest her,” the police were quoted as saying.

Chandranee made headlines when, on March 10, she released a video on Instagram where she has a bleeding nose and narrates her sequence of events. “Zomato - are we really safe using ur services” she asked in the video. According to Chandranee, she had ordered food which ended up arriving late and complained to customer care asking for the meal to be returned or given to her for free. However, when she got into an argument with Kamaraj over her refusal to pay, she says he entered the house, took the order and struck her, before fleeing.

While Chandranee’s story initially led to outrage, Zomato later released a statement saying their topmost priority was to get to the truth of the matter. The company said Kamaraj had a high rating and had performed around 5,000 deliveries before. Zomato said they would cover Chandranee’s medical expenses as well as Kamaraj’s legal fees.

Kamaraj later said Chandranee had started hitting him with her slipper and that when he raised his arms to defend himself, she hurt herself with the ring on her hand. On March 15, he filed an FIR against her for abuse.

According to media reports, FIR has been registered against her under sections 339 (wrongful restraint), 355 (assault), 506 (criminal intimidation) of the IPC at Bengaluru’s Electronic City police station.

The police said based on the complaint, Chandranee will be called to the police station and questioned.

The delivery executive, Kamaraj, had earlier said the woman sustained injury after he guarding himself against her attacks. “She started hitting me with slippers and at some point in time while safeguarding myself, my left hand touched her right hand and the ring which she [was wearing] hit her nose and it started bleeding,” he had said.