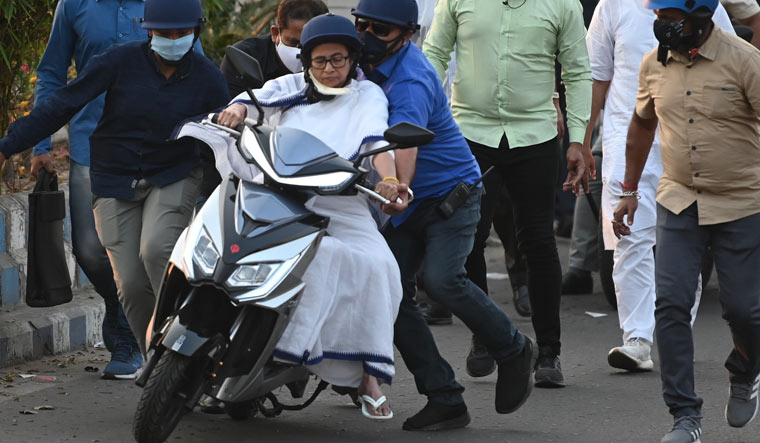 West Bengal Chief Minister Mamata Banerjee rode an electric scooter in Howrah as a mark of protest against the rising fuel hike.

A video, that has gone viral, showed the chief minister nearly falling down from the electric scooter and people around her helping her to regain balance. She soon gained balance and continued to ride.

#WATCH | West Bengal CM Mamata Banerjee nearly falls while driving an electric scooter in Howrah, as a mark of protest against fuel price hike. She quickly regained her balance with support and continued to drive.

She is travelling to Kalighat from State Secretariat in Nabanna pic.twitter.com/CnAsQYNhTP

Earlier, she rode pillion on an electric scooter to state secretariat Nabanna. Banerjee was seen sitting behind state minister Firhad Hakim. With a placard protesting against the petrol price hike hanging around her neck, helmet-clad Banerjee waved at people on both sides of the road during the seven-km-long journey from Hazra More to the state secretariat.

After reaching Nabanna following a 45-minute ride, Banerjee slammed the BJP-led government at the Centre saying, "We are protesting against the fuel price hike. The Modi government only makes false promises. They have done nothing to bring down fuel prices. You can see the difference in petrol prices when the Modi government came to power and now."

She said the TMC will launch a stir against fuel price rise from Friday.