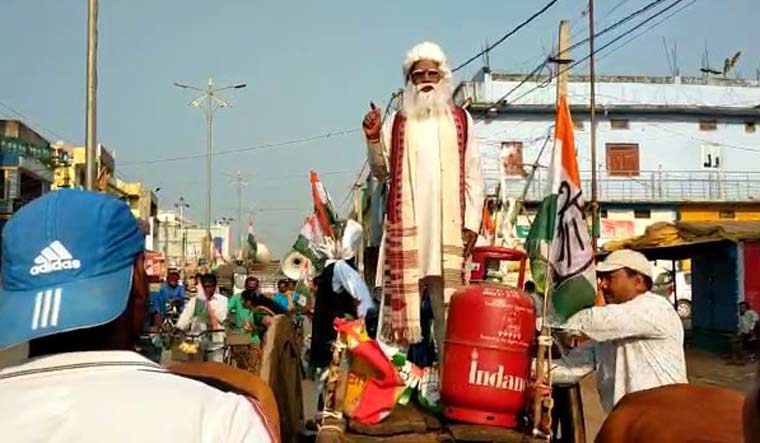 Normal life was completely affected across Odisha on Monday due to a six-hour bandh called by the Congress in protest against fuel price rise.

Educational institutions remained closed, train services were affected and vehicles remained off the roads in the bandh that began at 7am.

No untoward incident, however, was reported from any district, a home department official said.

Congress activists blocked national highways in various parts of the state, including in the capital Bhubaneswar, leading to huge traffic jams.

Air and bus travellers also faced a tough time in reaching their destinations due to the unavailability of public transport.

Travellers suffered at bus terminals as the All Odisha Bus Owners' Association suspended passenger bus services across the state during the bandh hours.

As many as 25 platoons of police personnel were deployed in the state capital to prevent any untoward incident.

"The bandh has been completely peaceful due to massive support from the people," Odisha Pradesh Congress Committee chief Niranjan Patnaik said.

He said that emergency services, including ambulance, milk vans and vehicles of media and examinees were exempted from the purview of the bandh.

"The bandh was called to mount pressure on both the state and Central governments to reduce tax on petroleum products, which will help in lowering the prices of petrol and diesel," he said.

With vehicles remaining off the roads, many government employees pedalled to their offices across the state, including in Bhubaneswar.

The main gates of state secretariat Lok Seva Bhavan were closed at 10.15am to prevent agitators from entering the premises while employees used side gates for entry and exit, a police officer said.

Congress workers offered chocolates to people venturing on the streets of Cuttack on their private vehicles during the bandh hours.

Paradip Port, however, functioned normally and its loading and unloading operations were not affected by the bandh, an official said.

The ruling BJD neither supported nor opposed the bandh, but the opposition BJP criticised the Congress for causing trouble to the people by enforcing the bandh. "The Congress is facing an identity crisis and it called for the bandh to divert people's attention from its internal squabbles. The state government should also announce a reduction in VAT and opt for GST on petroleum products to bring down the prices of petrol and diesel," BJP MLA and the party's deputy leader in Assembly, B.C. Sethi, said.