The MH-60R is the primary anti-submarine, anti-surface warfare helicopter of US Navy 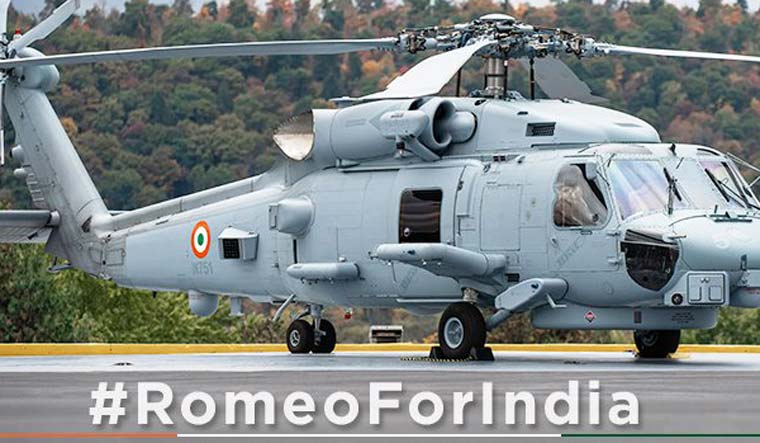 Less than an year after US President Donald Trump announced that the Indian Navy would buy 24 MH-60R Sea Hawk anti-submarine warfare helicopters, Lockheed Martin released the first photograph of the aircraft in Indian markings on Friday.

Over the past week, Lockheed Martin India had been teasing on its Twitter handle that the MH-60R 'Romeo' for the Indian Navy would be unveiled as part of Navy Day celebrations on December 4.

In May, Sikorsky, a subsidiary of Lockheed Martin, signed a contract to build the MH-60R for the Indian Navy. In May, Breaking Defense, a US defence publication, reported that the US would be delivering the MH-60R on a priority basis to India. Breaking Defense reported, "… The US Navy allowed Sikorsky to take three of its brand-new MH-60R Sea Hawks and begin modifying them to Indian standards to deliver next spring." The accelerated delivery plan was attributed to the growing activities of the Chinese navy in the Indian Ocean.

The original deal, valued at $2.6 billion, for the 24 MH-60R helicopters envisaged the sale of anti-submarine torpedoes, Hellfire anti-ship missiles and a guided rocket system to attack small boats. The MH-60R's sensors, including sonars, radar and optical systems, will provide a quantum leap in detection capability to the Indian Navy.

The MH-60R helicopters will be the first new western heavy anti-submarine helicopters to enter Indian Navy service after the British-supplied Sea King first entered service in July 1971. The Sea King remains in service with the Indian Navy, but in dwindling numbers.