Mir was the ‘project manager’ of Mumbai terror attacks in 2008 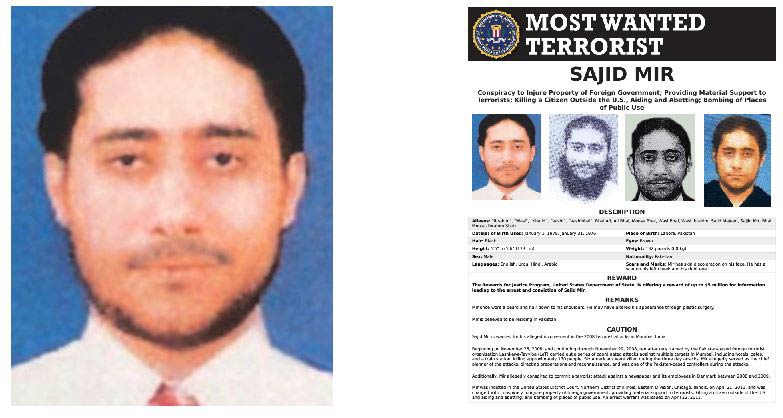 On November 26, 2008, as many as 166 people of 17 different nationalities were killed and more than 300 wounded in multiple terror attacks in Mumbai. The “project manager” of this carnage was Sajid Mir, the key operative of Lashkar-e-Taiba. The project moved Mir to the most wanted list of both the FBI and India.

Mir is also the brain behind the Denmark bombing operation codenamed ‘Micky Mouse’, referring to the publishing of cartoons of the Prophet in the Danish newspaper Jyllands Posten. In 2007, a French court convicted a French national Willie Brigitte for planning terrorist attacks in Australia in 2003 in conjunction with Mir, the LeT’s suspected chief of external operations. Yet, Mir is still elusive.

The US country report on terrorism in 2019 had indicated his presence in Pakistan. Latest intelligence reports, too, said that he had been spotted near the Muridke camp of the Lashkar-e-Taiba.

The US Department of States has offered a reward of USD 5 million for information leading to the arrest and conviction of Sajid Mir.

The FBI describes him as a man who had a beard and hair down to his shoulders but believes that he may have altered his appearance through plastic surgery. Some intelligence reports already indicate that Mir has undergone plastic surgery and removed the scar on his face.

Despite being on the FBI’s most wanted list, Mir is not on the United Nations Security Council Resolution list (UNSCR 1267) which imposes sanctions against terrorists and their entities. It poses a challenge to counter terrorism efforts of global agencies who are trying to lay hands on him, the home ministry officials said. In the absence of these sanctions, government sources said, Pakistan ISI continues to fund him and ensure his stay in Pakistan.

Even Mir’s associates like Abu Qahafa (responsible for training the operatives), David Headley (recce in-charge); Major Iqbal (funding and guidance); Abdul Rehman (recce) have not made it to the UN sanctions list so far.

Government officials said it is time international pressure was applied on Pakistan to act against Mir who has been trying to maximise the global footprint of Lashkar-e-Taiba.

A close look at Mir’s profile provides an insight into the making of one of the world’s most dreaded terrorists at large who guided the attackers from the Pakistani control room during the Mumbai siege.

A dossier on Mir reveals his connections with the Pakistani deep state, his indoctrination by LeT and how he grew to become the commander-in-charge for western jihadists.

Mir hails from a middle-class ethnic Punjabi family. His father Abdul Majid was a partition refugee who set up a small textiles business in Lahore for a living. His wife was the daughter of a retired Pakistani army officer. Sajid’s indoctrination into the world of hate thus began at home and it was polished by the training at Lashkar-e-Taiba camps where he grew in the ranks and became their commander-in-charge for training of western jihadists.

With a clear strategy to maximise the global footprint of Lashkar-e-Taiba, Mir started scouting for assets that could be used abroad. Brigitte from France, David Headley from the US and Faheem Lodhi from Australia were the discoveries of Mir.

Brigitte, in his interrogation, had described Mir as “Uncle Bill” who was fluent in Arabic, Urdu and English.

Mir had undergone training by Ilyas Kashmiri, an Al Qaeda-linked militant commander handled by the ISI, who was reportedly killed in a US drone strike in 2011. To give his activities an element of deniability, Mir had set up a restaurant in Bangkok and a textile business in Bangladesh as fronts for his terror activities. To ensure constant oversight for his plans, he leveraged the already existing Lashkar-e-Taiba network of Abdul Rehman Hashim alias Pasha, another member of the Ilyas Kashmiri camp, in Nepal and Bangladesh. Sources said Major Abdul Rahman, an officer of the sixth battalion of the Baloch regiment, had set up his own “Karachi Project“ in Nepal where he trained Muslim youth for bomb-making and infiltration into India through the porous India- Nepal border.

In 2005, both Mir and Pasha found an opportunity to scout for targets in India and they subsequently sent David Headley to do the recce. Headley, with an American passport and looks, was easier to slip through without being detected by the immigration officials. It was the reconnaissance footage and maps provided by Headley that Mir used to plot and guide the ten Pakistani youth who carried out the gruesome 26/11 attacks.