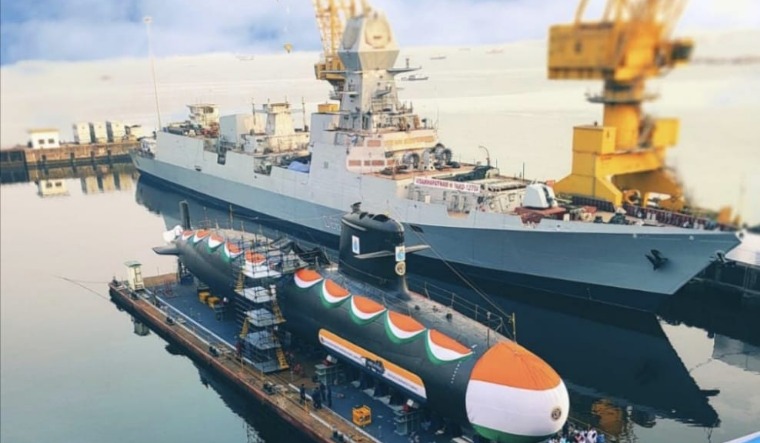 The Vagir at Mazagon Dock; a Visakhapatnam class destroyer can also be seen alongside | Twitter handle of Indian Navy

A day before Diwali, the Indian Navy's fifth Scorpene class submarine, named Vagir, was launched at the Mazagon Dock in Mumbai on Thursday. Vagir, part of the six Kalvari class submarines being built in India, is equipped with stealth features like the advanced acoustic absorption technique.

But the Navy’s fleet of attack submarines, all diesel powered, has dwindled from an awesome 21 in the 1980s to just 15 at present. Worse still, at least half of the available submarines are old and creaking, and undergoing mid-life upgrade. It means the Indian Navy has just seven submarines that are battle ready at any given time, against 65 submarines operated by the Chinese navy.

Though India has the largest coastline of 7,516 km among any other maritime state with its blue water navy ambitions, its underwater capability is nowhere close to its needs. Ideally, the Indian Navy needs at least 24 submarines to meet its 30-year submarine-building plan, which was approved by the cabinet committee on security in 1999, months after the Kargil conflict.

Named after the Sand Fish, a deadly deep sea predator, Vagir will take a year to formally join the Indian Navy's underwater fleet after comprehensive trials. The third and fourth submarines of the Scorpene class are yet to complete their sea trials. The submarine can operate at a depth of 300 metres underwater and travel 1,020km underwater. It can carry and fire 18 torpedoes and tube-launched anti-ship missiles underwater or from the surface.

In 2006, an agreement was signed—between the French firm Naval Group, formerly known as DCNS, and Mazagon Dock Limited—to build six Scorpene class submarines in India. The first submarine was scheduled to be delivered by 2012, but the project witnessed repeated delays. Originally, the entire project was expected to be completed by 2020.

And the next programme to build submarines was Project-75 India (Project-75I). Under this project, the Indian Navy will get six conventional submarines with better sensors and weapons and an air-independent propulsion system (AIP), all of which will be manufactured in the country. However, Project-75I is running at a snail’s pace. Earlier this year, the highest acquisition body in the ministry of defence, Defence Acquisition Council, had shortlisted Mazagon Dock and private shipbuilder Larsen & Toubro (L&T) in the race to construct six new stealth submarines with foreign collaboration under Project-75 India worth Rs 50,000 crore.

Last year, the cabinet committee on security approved a programme to build six nuclear-powered attack submarines, costing an estimated Rs 90,000 crore as an answer to Beijing’s naval might. But experts believe that the project will take at least a decade to complete.