UP: 13 cities, including Lucknow, ban sale and use of firecrackers

Of the 12 cities monitored in real time, Mirzapur at 327 was most severely affected 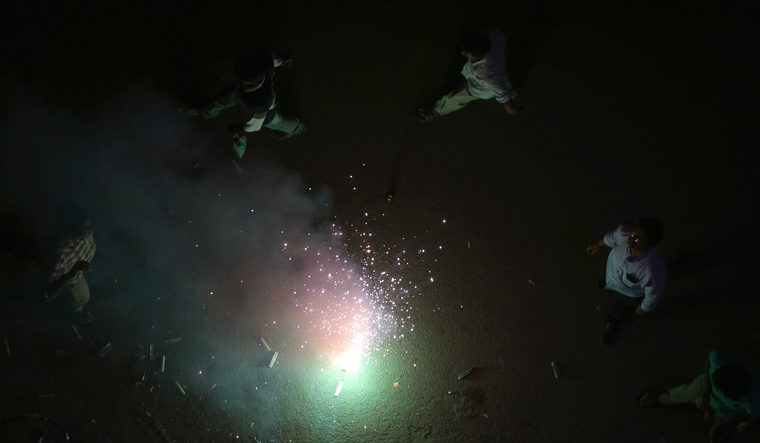 The Uttar Pradesh government ordered a total ban on sale and use of all kinds of firecrackers in the National Capital Region and in such cities where the air quality is poor.

The order is also applicable to all such cities/towns where the average quality of ambient air during November (as per data available from last year) is in the 'poor and above’ category.

Muzaffarnagar, with an AQI of 201-300 falls in the ‘poor’ category, while among the other cities identified in the NCR, Meerut and Hapur fall in the ‘very poor’ category with AQI of 301-400. Ghaziabad, Noida, Greater Noida, Baghpat and Bulandshehar round up the list of NCR cities and have AQIs of more than 401, thus falling in the ‘severe’ category.

The other very poor category cities include Agra and Varanasi; while Kanpur, Lucknow and Moradabad fall in the severe category.

In such cities and towns where the air quality is 'moderate' or below, only green crackers are to be sold. Bursting of such crackers will be limited to two hours during festivals like Diwali, Chatt, New Year/ Christmas Eve.

Green crackers do not contain banned chemicals such as lithium and arsenic, barium and lead. They contain minimal aluminium and are safe to be disposed in water.

The directive notes that these instructions are bearing in mind “aggravated effect during COVID-19”.

On November 11, the average air quality index in the state was 235- a number which falls in the unhealthy category. Air of this quality can aggravate health difficulties especially in young children and the elderly.

Of the 12 cities monitored in real time, Mirzapur at 327 was the most severely affected. The state’s capital Lucknow and the PM’s constituency Varanasi fall in the ‘poor’ category.