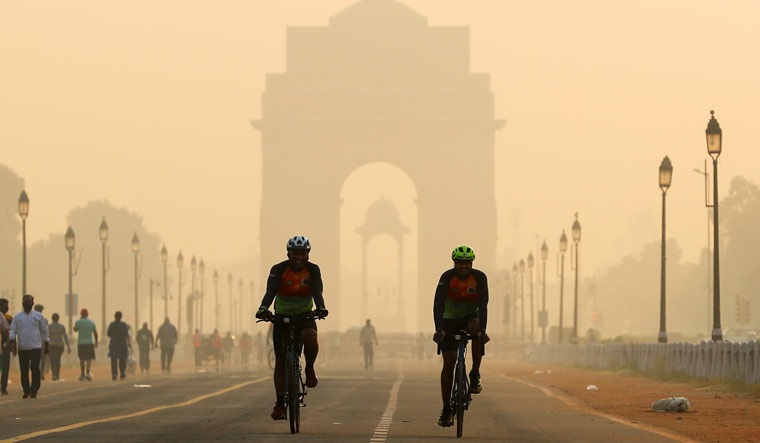 Men ride their bicycles in front of the India Gate shrouded in smog, in New Delhi | Reuters

The government will soon bring in a new law to curb air pollution in Delhi-NCR, a top official from the ministry of environment said on Monday. "The new law will be only for Delhi and NCR. It will come out soon. I cannot comment on what penalties it will entail. It's a new law to curb pollution in Delhi-NCR region only. Air Act is for the nation and it will be as it is," Environment Secretary R.P. Gupta told PTI.

The response from him came after the Supreme Court, which had raised concern over the worsening air quality in Delhi-NCR, was told by the Centre that it will bring a new legislation to curb pollution and submit a proposal before it in four days.

A layer of poisonous haze lingered over the national capital on Monday as the air quality in the city was recorded in the "very poor" category for the fourth consecutive day.

Delhi's air quality is predicted to remain in the 'very poor' category till October 31.

Most of the air quality monitoring stations in the city recorded the air quality in the very poor category, while pollution levels rose to "severe" levels at Vivek Vihar (AQI 414), Wazirpur (404) and Anand Vihar (418).

In its October 16 order, the top court had ordered deployment of National Cadet Corps, National Service Scheme and Bharat Scouts and Guides for assisting in the monitoring of stubble burning in the agricultural fields of Punjab, Haryana, Uttar Pradesh and Delhi-NCR, saying all it wants is that "people of Delhi-NCR can breathe fresh air without any pollution".