Little progress in India-China talks; all eyes on 2+2 dialogue with US

From the Quad to the 2+2 to Malabar, India engages potential allies against China 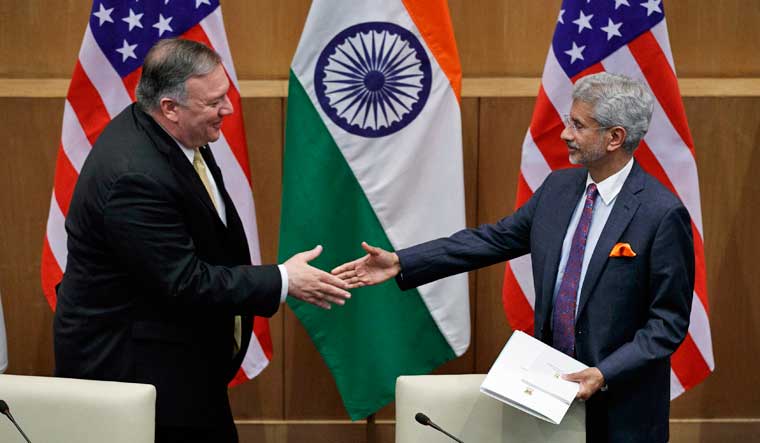 The Ministry of External Affairs (MEA) has more or less admitted that there has been no forward movement towards resolving the border issue with China, despite the new energy and direction taken by foreign ministers S. Jaishankar and Wang Yi during their September 10 meeting in Moscow.

“The immediate task is to ensure a comprehensive disengagement of troops on all the friction areas,'' said spokesperson Anurag Srivastava on Thursday, a clear indicator that, over 40 days after the new agreement, too, no progress had been made.

It is not as if the two sides have not talked; it is just that there was no breakthrough in the talks. The two sides held the 19th meeting of the Working Mechanism for Consultation and Coordination on India-China Border Affairs on September 30, and the seventh meeting of the Senior commanders in Chushul on October 12. “The two sides have reiterated their desire to maintain dialogue and communication through military and diplomatic channels and arrive at mutually acceptable solution for disengagement as early as possible,'' Srivastava added.

In the view of the stalemate with China, the much-anticipated meeting with the US top officials—the 2+2—will be hosted in India next week. US secretary of state Michael Pompeo and defence secretary Mark Esper are visiting India on October 26-27 for this meeting with Jaishankar and defence minister Rajnath Singh, and later, also with National Security Advisor Ajit Doval. They will also call on Prime Minister Narendra Modi.

This will be the third 2+2 meeting. These have been hosted alternately between New Delhi and Washington. The fact that the two ministers decided to come to India, second only to the US in COVID-19 numbers, speaks to the importance the US gives this meeting. Only a few days ago, deputy secretary of state Stephen Beigun visited India in preparation of the meet. Earlier, Zalmay Khalilzad, the US special envoy on Afghanistan, had also visited, soon after the inauguration of the Inter-Afghan Peace Deal talks in Doha. Pompeo had also met Jaishankar in Tokyo a few weeks ago during the foreign minister-level meeting of the Quad.

The naval exercise Malabar is being held in the Arabian Sea and Bay of Bengal next month, with Australia also finally joining this exercise, making it a Quad naval exercise finally. It will be a clear messaging on the military ties of the Quad, at a time when China’s relations with both India and the US are rather strained. The 2+2 talks will entail a comprehensive discussion on cross-cutting bilateral issues of mutual interest, said Srivastava. Both sides will also “exchange views on salient regional and global issues,” he emphasised.