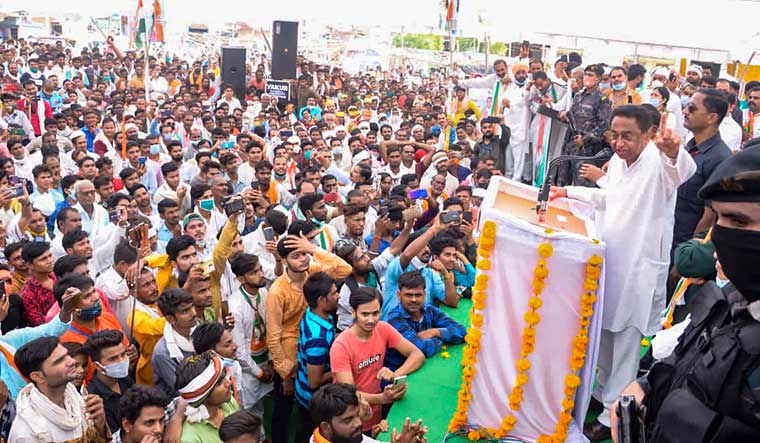 Former Madhya Pradesh chief minister and state Congress committee president Kamal Nath courted controversy during the bypolls campaign on Sunday when he referred to a woman minister as an “item’”.

Kamal Nath’s controversial statement came at a public meeting in Dabra of Gwalior where he was campaigning for Congress's Suresh Raje who is contesting against state minister Imarti Devi, a staunch supporter of Rajya Sabha MP Jyotiraditya Scindia. Devi was also a minister in the Kamal Nath cabinet during the 15-month Congress rule, before defecting to BJP.

The video of Kamal Nath’s statement has gone viral on social plat forms. Chief Minister Shivraj Singh Chouhan has sought an apology from the ex-CM, saying the words used by Kamal Nath showed his feudal mentality.

Chouhan said he will observe a 'silent protest' on Monday for two hours, from 10 am to 12 noon, against Kamal Nath's remarks.

Jyotiraditya Scindia also termed the usage of such words “against a woman leader coming from a dalit and poor family” as objectionable and condemnable. He said in a tweet that it is time that the arrogant leader was taught a lesson for insulting not only women but the entire dalit community.

During his speech, Kamal Nath said that the Congress candidate was a simple and humble man and not like the ‘other one’, and added that he did not want to name her. When the crowd yelled ‘Imarti Devi’, Kamal Nath laughed out and said, “you know her better than me. You should have warned me that she is such an item.”

As the video clip went viral, the BJP hit back at Kamal Nath. “You have displayed your cheap mentality by referring to a respectable woman as an 'item' during the auspicious days of Navratri. This cheap mentality took away the rights of our daughters as soon as you came to power. Now the daughters will pack you off in the bypolls,” tweeted BJP's MP unit.

Earlier, Chouhan tweeted from his personal handle: “Kamal Nath ji, Imarti Devi is the daughter of a poor farmer who started out as a manual worker and is now contributing to nation building as a people’s servant. Congress has displayed its feudalistic mindset by calling me starved-naked and a woman an item.”

He tweeted again saying, “People who want to call themselves maryada purushottam are using indecorous language against women even when the country is worshipping women on occasion of Navratri. It will be better if you take back your words and seek apology from Imarti Devi and all daughters of the state.”

Meanwhile, Narendra Saluja, the media coordinator of Kamal Nath issued a statement saying that Kamal Nath never named Imarti Devi during his speech and also said that he did not want to name anyone, but the BJP was deliberately linking the name of the minister to the statement to insult her. The BJP should actually apologise for this and for making a false complaint with the Election Commission.