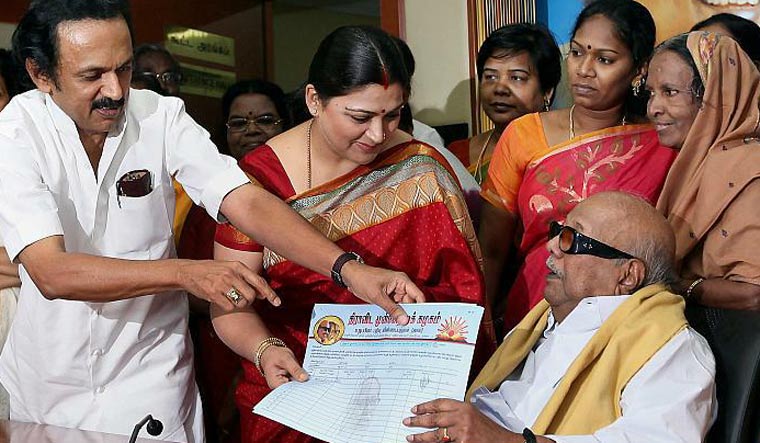 Popular South Indian actor-politician and Congress party's national spokesperson Khushbu Sundar, who resigned from the party on Monday, will be joining the BJP in the afternoon on Monday. The actress who had been unhappy with the Tamil Nadu unit of the Congress in the recent days, left for Delhi Sunday evening with her director husband C. Sundar.

When asked if she was still with the Congress, she refused to comment saying, "I don't want to comment anything." Apparently, the actress who is suave and articulate, had recently reached out to Congress's K.C. Venugopal expressing her unhappiness in the national party. However, Khushbu had been denying reports of her joining the saffron party in recent weeks.

It all began in July after she welcomed the New Education Policy, brought by the BJP government at the Centre, even as the Congress strongly opposed it. She later explained that she had sent her apologies to Rahul Gandhi. She also had a different view in Triple Talaq and CAA even though she was the national spokesperson of the Congress party.

"The Sanghis can relax. Please do not rejoice. I am not moving to BJP. My opinion might be different from my party. But I am an individual with a thinking mind of my own. Yes. NEP2020 is flayed and flawed at some places, but I feel we can still look at the change with positivity," she tweeted in July.

Khushbu's political journey began with the DMK in 2010. She joined the DMK in the presence of M. Karunanidhi at the party headquarters Anna Arivalayam in Chennai. It was a happy moment for the DMK then as she was a star, who the DMK believed could bring more power to the party. Later in 2014, Khushbu reportedly had differences with the DMK party leadership and switched over to the Congress. She joined the Congress in the presence of Rahul Gandhi and was later made the national spokesperson of the party.

Incidentally, Tamil Nadu is a state where politics and cinema are considered bedfellows and star power takes political parties to a higher level in winning votes. However, after MGR and Jayalalithaa, no cinema star could prove their strength in politics, except for campaigning.