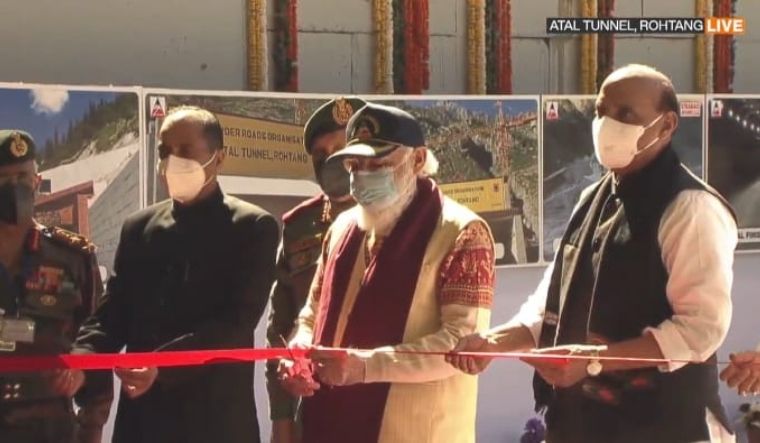 Prime Minister Narendra Modi on Saturday inaugurated the strategically important all-weather Atal Tunnel, which reduces the distance between Manali and Leh by 46 km and the travel time by four to five hours, at Rohtang in Himachal Pradesh.

"Atal tunnel will give new strength to India's border infrastructure. It is an example of world-class border connectivity. There have been demands to improve border infrastructure but for a long time, such projects either could not get out of the planning stage or got stuck midway," the prime minister said in his inaugural address.

Atal Tunnel is the longest highway tunnel in the world, and the 9.02 km long tunnel connects Manali to Lahaul-Spiti valley throughout the year. The valley was earlier cut off for about six months every year due to heavy snowfall. "Atal tunnel will give new strength to India's border infrastructure. It is an example of world-class border connectivity. There have been demands to improve border infrastructure but for a long time, such projects either couldn't get out of planning stage or got stuck midway," Modi said.

"Connectivity has a direct connection with development. Connectivity in border areas is directly related to security issues.  There is nothing more important for us than protecting the country. But the country has also seen that a period when the defense interests of the country were compromised," he added.

He said that his government has emphasised on the development of border infrastructure. Its benefits are being extended to the common people as well as our armed forces personnel.

Many other important projects were treated in the same way as Atal tunnel. "The strategically important Daulat Beg Oldi airstrip in Ladakh remained closed for 40–45 years. I don't want to go into details as to what was the helplessness and the pressure behind it," Modi said.

The prime minister also took a veiled dig at the UPA I and UPA II governments. "Atalji laid the foundation stone of the approach road of this tunnel in 2002. Till 2013-2014, progress was made only on 1,300 meters of this tunnel. After 2014, the project progressed with unprecedented pace. Experts say if the tunnel was constructed with the pace it was being built at that time, it would probably be completed in 2040. We completed the work in just six years that would have taken 26 years," Modi said.

Further, he requested the Ministry of Education to let students of engineering and technical studies-related universities do a case study of Atal Tunnel. The students must learn how this tunnel was built, he said, adding, "I want the Ministry of External Affairs to invite some universities for case studies on this tunnel. The world should know how our jawans can do such a wonderful job in limited resources."

It is a horseshoe-shaped, single-tube double lane tunnel with a roadway of 8 metres and has an overhead clearance of 5.525 metres, officials said. The tunnel, built at a cost of about Rs 3,300 crore, is extremely significant from the point of view of the country's defence.

The Atal Bihari Vajpayee government had taken the decision to construct the strategic tunnel below the Rohtang Pass on June 3, 2000, and the foundation stone for the access road to the south portal of the tunnel was laid on May 26, 2002.

Vajpayee got the idea for constructing the tunnel on a suggestion from his friend Arjun Gopal of Tashi Dobhe village in Lahaul, Himachal Pradesh Chief Minister Jai Ram Thakur had said. The Modi government decided to name the Rohtang Tunnel as Atal Tunnel in December 2019 to honour the former prime minister who had passed away the previous year.