Pakistan to reopen Kartarpur corridor, India yet to decide on opening

‘Decision will be taken in accordance with the Covid protocol' 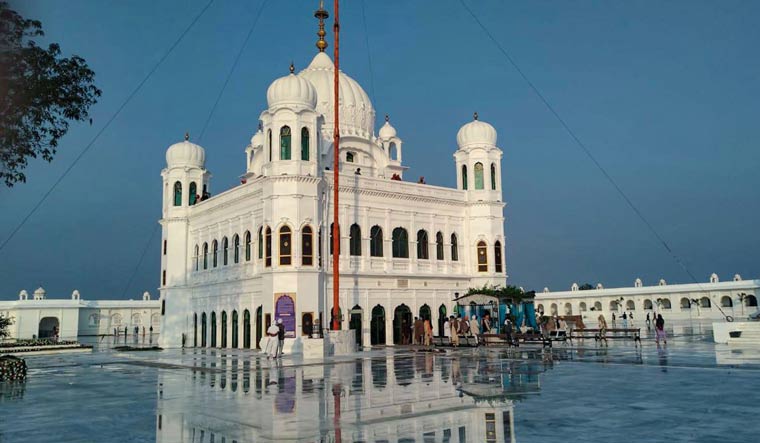 A view of Gurdwara Kartarpur Sahib in Pakistan | PTI

The Kartarpur corridor has been caught once again in the middle of rapidly deteriorating relations between India and Pakistan.

On Friday, Pakistan declared its intention to throw open the Kartarpur Corridor. India, however, is keeping the doors shut for the moment. The decision to reopen the corridor is in accordance with COVID protocols, the ministry of external affairs asserted.

“As you are aware, movement was suspended in the wake of Covid-19 outbreak,’’ said the MEA spokesperson Anurag Srivastava. “We remain in touch with all concerned authorities including Ministries of Home Affairs and Health & Family Welfare. A decision on re-opening of the corridor would be taken in accordance with the Covid protocol and easing of restrictions.’’

This is not the first time that both countries have sparred over the opening of the corridor.  In June, Pakistan chose to announce the opening—in the middle of the pandemic—but no Indian pilgrim crossed over. And it is the battle of narratives that Pakistan wants to control. Especially after the UN chief Antonio Guterres, who visited the revered Gurdwara Darbar Sahib earlier in the year, asserted that it was a practical example of Pakistan's desire for peace and inter-faith harmony, Radio Pakistan reported. Pakistan is hoping to cash into this image.

Like now, in June too, the opening of the corridor was announced by Pakistan--without India's consent. Foreign minister SM Qureshi had announced the readiness. "I convey to the Indian side our readiness to reopen the corridor on 29 June 2020, the occasion of the death anniversary of Maharaja Ranjeet Singh," he said on Twitter.

The idea was to make a grand gesture of goodwill toward the Sikh community—despite there being protocols on both sides that information has to be shared at least a week before travel. India had even then asserted that a decision to open the corridor will be taken after consulting stakeholders as well as health officials.

On Friday, Pakistan’s Ministry of Religious Affairs issued a notification that the corridor will be open from dawn to dusk to Indian pilgrims.

However, the opening of the corridor is not the only bone of contention. India has claimed that Pakistan has not kept up its side of the bargain in the bilateral agreement.

“At the time of opening of the Kartarpur corridor last year and in the bilateral agreement signed in October 2019, it was decided that both sides shall establish requisite infrastructure including construction of a bridge at Budhi Ravi Channel at the earliest for safe and hassle-free movement of pilgrims,’’ said Srivastava. “One year hence, Pakistan is yet to construct the bridge while it is ready at our end.’’

A technical meeting with Pakistan was also facilitated and two teams met on August 27 this year. However, MEA claims that there has been no progress from Pakistan.

The corridor which was thrown open in November last year had been dubbed the corridor of peace by Prime Minister Narendra Modi on the occasion of 550th birth anniversary celebrations of Guru Nanak. Kartarpur was where he had spent the last 18 years of his life. The corridor—which is the only one of its kind between the two countries—has been at the heart of battle of narratives between both countries. The corridor opened despite hostilities on both sides.