All offices, barring essential services, have been asked to shut on Wednesday 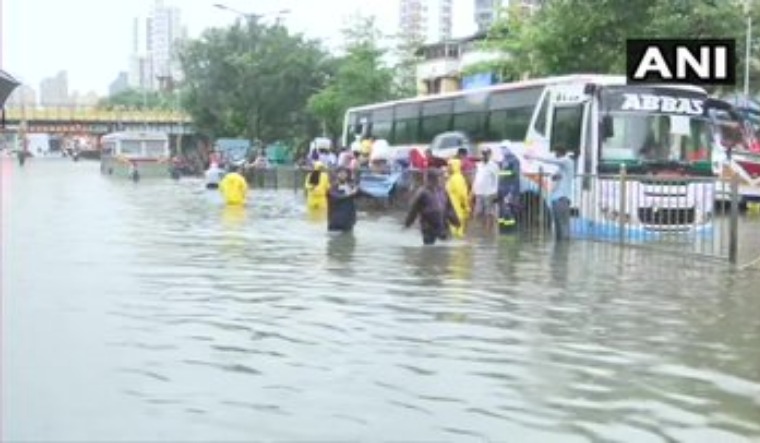 A waterlogged road in Mumbai | Twitter handle of ANI

Heavy rains lashed Mumbai overnight, leaving many parts of the metropolis in waist-deep water and disrupting rail and road traffic on Wednesday, officials said. Rains across the island city and the western suburbs picked up late on Tuesday evening. There were intense spells across Mumbai for a few hours overnight, an official said.

On Wednesday morning, public transport services were hit and normal life affected in the financial capital due to heavy downpour and waterlogging.

Several streets and low-lying areas were waterlogged due to overnight rains and the road traffic was also badly hit, a civic official said. Some vehicles broke down in the water, affecting the traffic movement, he added.

Mumbai's municipal commissioner Iqbal Singh Chahal has asked that all offices and establishments in the city, barring essential services, be shut on Wednesday due to the downpour and IMD's forecast of "heavy to very heavy rains" in the city.

A Brihanmumbai Municipal Corporation (BMC) release said Chahal has also appealed Mumbaikars not to step out of their homes, unless it is an emergency.

The Nair Hospital in Mumbai Central has also been flooded. The Nair Hospital is a designated facility for COVID-19 treatment. Video clips shared by news agency ANI showed hospital beds, buckets and medical equipment in water.

A Central Railway spokesperson said suburban services were suspended at 5am on Wednesday following heavy rains along the tracks.

"Due to heavy rain and waterlogging in Sion-Kurla and Chunabhatti-Kurla, traffic has been suspended on CSMT-Thane and CSMT-Vashi sections for safety reasons," he said.

Special shuttle services are being run between Thane-Kasara, Thane-Karjat and Vashi-Panvel stations, while several long-distance trains have been rescheduled, he said.

The Western Railway also said its suburban train service has been suspended due to heavy rain and waterlogging between Churchgate and Andheri stations.

"Suburban locals service is running normally between Andheri and Virar," it tweeted.

Suburban trains, considered the lifeline of Mumbai, are being operated for essential services employees due to COVID-19 outbreak and common citizens are not authorised to travel in them as of now.

A civic official said the public bus service of the Brihanmumbai Electric Supply and Transport (BEST) has also been hit due to waterlogged streets and traffic diverted at several locations.

The India Meteorological Department (IMD) had issued an orange alert with a forecast of heavy rainfall at some places in Mumbai and Thane during the day.

The Colaba observatory (in south Mumbai) recorded 147.8mm rainfall during the same period, he said.