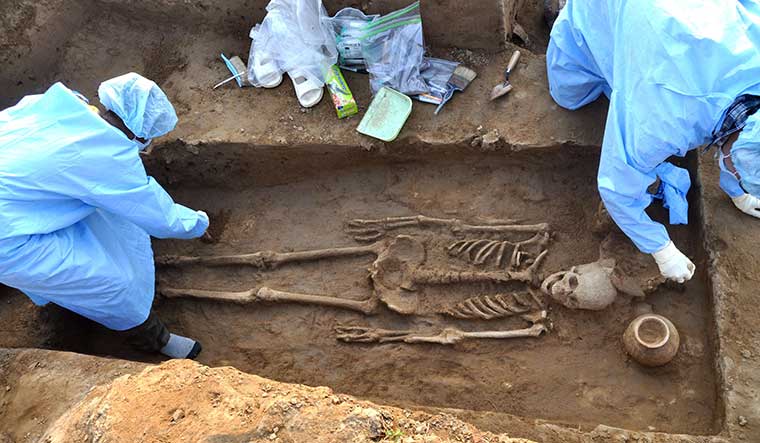 A 16-member committee now in the eye of a storm for its lack of diversity, formed by the Ministry of Culture to conduct a study on the origin and evolution of Indian culture, has its own history. Far from new,  it was formed when Mahesh Sharma was the minister of culture. This committee went dormant after two meetings and never submitted a report.

On Monday, Minister of Culture Prahlad Singh Patel, in a written reply to Parliament, announced that a 16- member committee “has been set up" for conducting “a study on the origin and evolution of Indian culture dating back to around 12,000 years ago". The committee, which had retired members of the Archaeological Survey of India, retired judge Mukundkam Sharma (who also spearheaded the committee on sports reforms), Sanskrit scholars and M.K. Sharma of the Chairman World Brahmin Federation India, also has Makhan Lal who has links with the Sangh Parivar.

When contacted by THE WEEK, members of the committee claimed they did not know if this was a newly constituted panel. “I have not got any letter till now," said one member on the condition of anonymity. Suggestions had been invited by the chairman of the committee, K.N. Dikshit, in the second meeting, but few suggestions were forthcoming.

The composition of the committee came up for criticism, especially by DMK MP Kanimozhi, for not having any minority or dalit representation. “Shouldn’t minorities or Dalits talk about Indian culture?” tweeted Kanimozhi on Tuesday. “Or are they ineligible?”

There is no woman scholar on the list, too. Classical singer T.M. Krishna, too, added to the criticism. “This committee constituted by the government of India to study Indian culture is proof if its bigoted, casteist, patriarchal nature. Culture is where the most damage is being done. We are ignoring it at our own peril," he tweeted.

For its part, the members of the committee, too, were surprised by the sudden media interest and were unsure whether it was the committee being reformed or a new committee with the same mandate. The committee, as one member explained, was to look at the antiquity of Indian history. “There is a need to clarify old concepts," said a member.

With the modern methods of dating, the idea was to find a scientific way to date India's history, which went beyond just the age of literature. “You need scientific data," as one member put it. “But any committee formed under this government, especially on culture, comes under the scanner," another added.

Controversy over culture seems to be a constant with the Modi government. Despite an effort to create a new vocabulary for the Indian culture, so far, the government has not been successful. There has been a huge renaming effort, the most recent being Uttar Pradesh Chief Minister Yogi Adityanath's attempt to rename a Mughal museum near the Taj Mahal after Shivaji. The move has invited criticism from historians, especially as Agra has no links with Shivaji. But there is one agenda—one that the RSS is certainly pushing for and that still remains a work in progress.