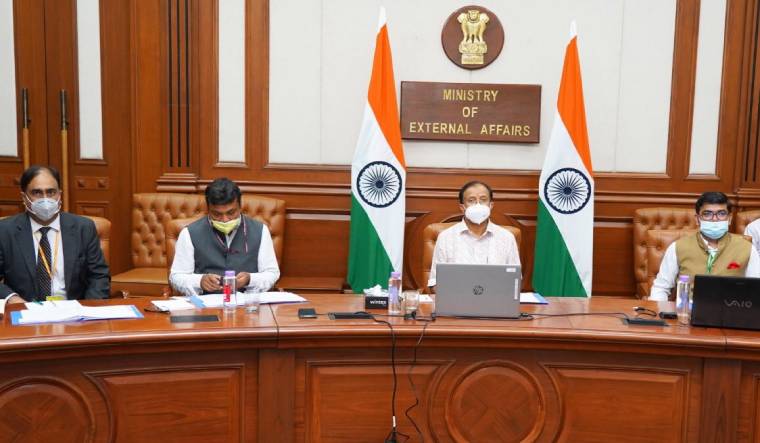 Minister of State for External Affairs V. Muraleedharan (second from right) during the virtual meet with Syria Foreign Affairs ministry | via Twitter/@MOS_MEA

The Minister of State for External Affairs V. Muraleedharan held a virtual meeting with Syrian Vice Minister of Foreign Affairs and Expatriates Dr Faisal Mekdad on Thursday. The meeting, according to an MEA statement, provided an “opportunity to comprehensively review the bilateral relations and chart a road map for further cooperation in areas of mutual interest”.

“Had excellent discussions with HE Faysal Mekdad, Vice Foreign Minister of Syria at the India-Syria Ministerial Consultations this evening. Thank him for his warm sentiments towards India and its people,” Muraleedharan tweeted.

Had excellent discussions with HE Faysal Mekdad, Vice Foreign Minister of Syria at the India-Syria Ministerial Consultations this evening. Thank him for his warm sentiments towards India and its people. 🇮🇳|🇸🇾 @narendramodi @DrSJaishankar @MEAIndia @eoidamascus pic.twitter.com/6gWK9hGR4I

“Congratulated Syria on successful elections to their People’s Assembly and conveyed India’s support for Syria’s national reconstruction efforts and the well-being of its people,” the minister was quoted by media.

India has reached out to Syria with 10 metric tonnes of medicines as part of its COVID-19 outreach services.

Muraleedharan reiterated India’s hope to see “a comprehensive and peaceful resolution of the decade-long Syrian conflict, through a Syrian-led and Syrian-owned dialogue, involving all parties to the conflict that takes into account the legitimate aspirations of the Syrian people while preserving the unity, sovereignty and territorial integrity of the country,” the press release stated.

India is one of the few countries that has chosen to have a nuanced stand on Syria. This stand has been consistent since the tenure of former prime minister Manmohan Singh.

In 2016, when former MoS M.J. Akbar met Syrian President Bashar al-Assad and Prime Minister Emad Mohammad Deeb Khamis, there were talks of closer security cooperation. Assad is believed to have told Akbar that India had a role to play in meeting the challenge of terrorism. Akbar had asserted that the “age of destruction should give way to the age of reconstruction in Syria.” Assad, is believed to have asked India to play a role in the reconstruction efforts. A bio-tech park and an IT Centre and extended USD 265 million in line of credit for projects in steel and power sectors, is part of this effort. Since 2011, India has provided US 12 million dollars in humanitarian assistance.