The demand has irked AIADMK 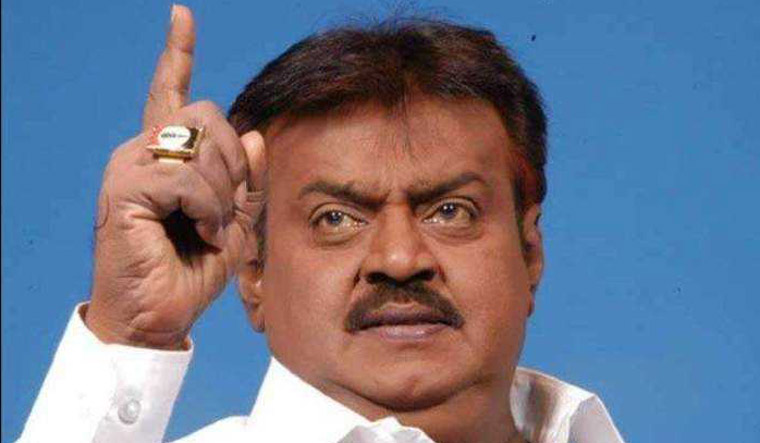 AIADMK ally DMDK on Tuesday said it wished to see its founder Vijayakanth as 'king' in next year's assembly elections in Tamil Nadu, remarks that did not appear to go well with the ruling party which asserted it would lead the alliance.

Vijayakanth's wife and DMDK treasurer Premalatha said her party cadres' wish is their 'Captain' (as Vijayakant is addressed by his supporters) to be a 'king' (and not a king maker) in the next assembly election for which they favour going it alone.

Her announcement, which came even as a host of AIADMK leaders, led by Chief Minister K. Palaniswami and his deputy O. Panneerselvam, wished Vijayakanth on his 68th birthday on Tuesday, appeared to have irked the ruling party.

Senior AIADMK leader and Fisheries Minister D. Jayakumar asserted that the assembly polls next year will be fought under his party's leadership and the alliance, formed during 2019 Lok Sabha elections, will continue for the hustings in 2021 as well.

He, however, said the DMDK leader's statement did not indicate a rift in the alliance.

AIADMK led the NDA in the state in the last Lok Sabha polls and the other key constituents included BJP and the PMK.

"It is the wish of our cadres that the DMDK leader Vijayakanth should be the king," Premalatha told reporters in Chennai after distributing sweets to party members at his residence here on his birthday.

Asked if her party will face the assembly election in the present alliance or go it alone, she replied, "there is still plenty of time for polls."

In due course, Vijayakanth will convene the party's executive committee and general council and announce the stand in December or January.

"We are still in the AIADMK alliance now," she said and added that during a recent video conference interaction, the party cadres expressed their wish that Vijayakanth be a 'king' and that DMDK should face the polls by itself.

"Our cadres are enthused and have huge expectations in the 2021 assembly polls," Premalatha said.

Responding to Premalatha's remarks, Jayakumar said that "she has only expressed her view."

"The DMDK is still in AIADMK's alliance. Premalatha's statement should not be construed as a rift in ties or weakening of the AIADMK. We are still a formidable force as we had been under the leadership of late M.G. Ramachandran or Jayalalithaa. The next assembly election will be fought under the AIADMK leadership," Jayakumar said.

Incidentally, BJP state vice president V.P. Duraisamy had recently said that being a national party, the BJP has the right to lead the alliance in 2021 polls.

Vijayakanth, a popular actor who launched his Desiya Murpokku Dravida Kazhagam in 2005, went on become the leader of the opposition in the assembly in 2011 when he joined hands with late Jayalalithaa who stormed to power that year.

He parted ways with her after a spat in the assembly later and faced the 2016 elections as part of the People's Welfare Front which included the two Left parties and Vaiko-led MDMK, only to draw a blank.

However, Vijayakanth joined the NDA in the 2019 Lok Sabha polls.