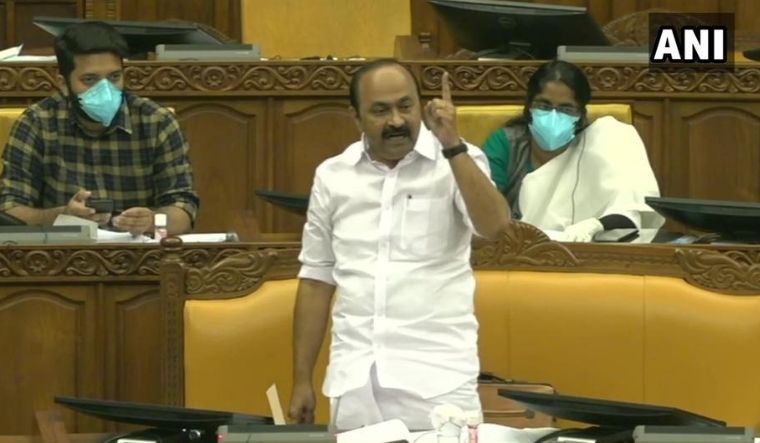 UDF's V.D. Satheeshan presenting the no-confidence motion against the LDF government in the Kerala state assembly on Monday | ANI Twitter

"Chief Minister Pinarayi Vijayan is an honourable man. But he's the captain of a ship that is caught in a storm. Unfortunately, the storm's origin is in the captain's cabin," said Congress-led UDF's legislator V.D. Satheeshan as he began his speech presenting the no-confidence motion against the LDF government in the Kerala state assembly on Monday. The opposition UDF is moving the no-confidence motion against the government on a number of issues, including the gold smuggling case and alleged corruption in the Life Mission housing project for the poor.

"The CMO's office was hijacked by the gold smugglers," hit out Satheeshan against the Vijayan government as he presented the no-confidence motion. The motion will be discussed for five hours before CM and his ministers respond to the motion.

The one-day assembly session began on a tumultuous note on Monday as the opposition insisting that the motion seeking the removal of Speaker P. Sreeramakrishnan for his "suspicious closeness" to a gold smuggling accused be taken up and the speaker refusing to oblige. Opposition leader Ramesh Chennithala raised the issue right after the motion of no-condence against the LDF government was allowed. Chennithala said that the speaker was unnecessarily taking cover under Assembly rules when he himself had convened the Assembly by violating rules.

The Speaker had rejected the motion moved by Muslim League MLA M.A. Ummer saying it did not have the time gap of 14 days. He said that if the summons to convene the Assembly was issued 15 days before the start of the session, as was mandatory, the opposition would have got the 14-day period necessary to move the motion against the speaker.

In the 140 member house, LDF has 91 members and UDF 45. A no-condence motion against the government is being brought after 15 years.

It was in 2005, that then minister Kodiyeri Balakrishnan had moved a motion alleging corruption charges against the Oommen Chandy government.