Fatality rate in Mumbai is 5.5%, three times higher than the national average 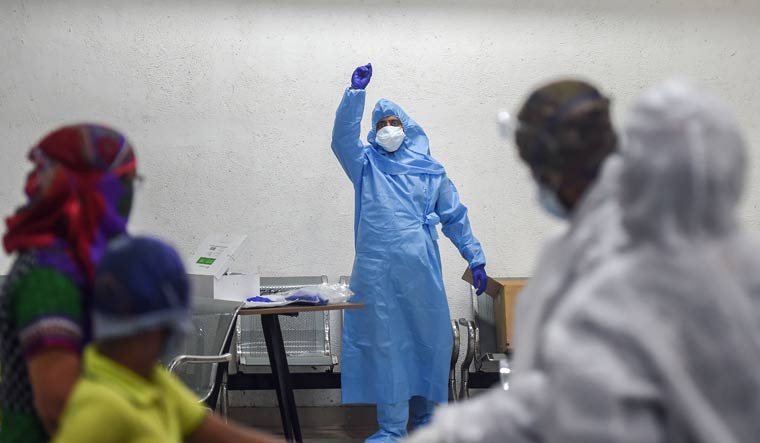 A medic wearing protective gear gestures during medical screening of residents for COVID-19, at Dadar in Mumbai | PTI

As of August 17, more than 20,000 people have died due to COVID-19 in the state of Maharashtra and nearly six lakh people have been infected by it. Although the state's fatality rate remains at 3.36 per cent, the number of deaths reported daily is increasing.

More than 200 deaths were recorded in the last 72 hours alone. In the past one month, the state has added over 8,000 deaths to the toll. This, despite the fact that the BMC, state government and the members of the state COVID task force are reiterating the ‘Save the Patient' strategy—whereby the focus is on reducing fatalities than containing the growing number of infections.

Pune, which has now overtaken Mumbai as the worst affected district by the pandemic in Maharashtra, reported 63 deaths in the last 24 hours, taking the death toll to over three thousand. The case fatality rate in Mumbai is 5.5 per cent, three times higher than the national CFR which stands at 1.93 per cent at present.

A number of factors contribute to the rise in mortality rate or for the high number of COVID-19 patients dying either at home or inside the hospitals in the city of Mumbai and elsewhere in the state of Maharashtra. The most common reasons that lead up to the death of a COVID-19 patient, as cited by authorities including the BMC, are the presence of comorbidities and delay in approaching hospitals for treatment.

"There's a lot of overcrowding at hospitals because of a high number of cases being reported daily. Mumbai itself is reporting a thousand cases each day and because of this there's overcrowding at the hospitals and delays in getting critical patients admitted. Patients are coming in from all over the suburbs and satellite towns for treatment in Mumbai, but sadly the treatment cannot be initiated in time because of which the patient dies," explains Dr Jeenam Shah, pulmonologist from Bhatia hospital in Mumbai.

However, family and relatives of those who have lost their lives due to COVID-19 have a different story to tell. "We do not get the ambulance or beds in hospitals in time; if we do, the stock of essential medicines to treat COVID-19 is unavailable. How can someone with a comorbid condition be made to wait for a vial of Remdesivir or Tocilizumab for days on end?," asks a middle aged man whose relative succumbed to the disease allegedly because of the lack of access to essential drugs.

The BMC has now decided to review death statistics across its hospitals starting last week. But shortages in essential drugs still remain acute. Tocilizumab which is used along with Remdesivir to treat COVID-19 patients who suffer a cytokine storm, which usually happens around seven to ten days after infection, has been selling for up to Rs 75000 in the black market, as per reports. This, when a single vial of the drug costs Rs 33,000. The shortage is most acutely felt in private hospitals, said a government official who refused to come on record.

According to the official statement released by Cipla, which is the official distributor for Tocilizumab in India, "due to unprecedented demand the drug is temporarily low on supplies. In the interim, please consult your doctor for advice. We are working closely with our global partners and the authorities and hope to resolve the situation as soon as possible."

According to Dr Anant Bhan, a researcher on global health policy, the relatively high fatality rate in Mumbai and Maharashtra is probably due to late reporting of patients at hospitals when they already have advanced disease, which could be due to stigma associated with illness, a fear of the disease and going to access care or being isolated, if found positive.

"It also points towards the need for more efforts on contact tracing, identifying those who are infected early, and referring them early to hospitals if found to be progressing towards serious disease. Concerns about challenges with accessing care, especially when in advanced disease (patients and families running around trying to access a hospital bed) could be another factor in higher fatality rates. Health infrastructure and human resource shortages have also been accentuated in Mumbai and parts of Maharashtra which has been facing the brunt of the disease for many weeks now," says Bhan.