The rescue and relief operation is still on 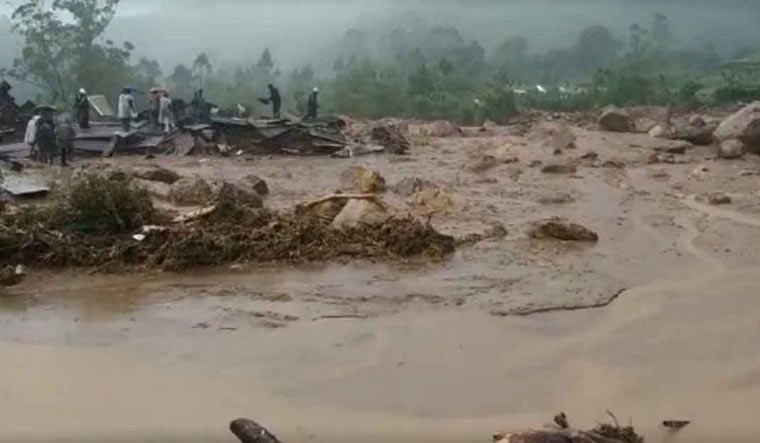 At least 15 people, including a child, died as torrential rains triggered a major landslide at Pettimudi in the high range Idukki district of Kerala in the wee hours of Friday. According to latest reports, over 60 people are still missing.

As many as 20 houses—most of them of tea plantation workers—were buried in the soil as a  mound of earth caved in around 2 am. The landslide occurred after heavy rains over the last few days in the area which is nearly 30 km from popular tourist destination Munnar.

"Pained by the loss of lives due to a landslide in Rajamalai, Idukki. In this hour of grief, my thoughts are with the bereaved families," Prime Minister Narendra Modi tweeted. The PMO said in a tweet that an ex-gratia of Rs 2 lakh each from the Prime Minister's National Relief Fund (PMNRF) would be given to the next of kin of those killed in the landslide. Rs 50,000 each would be given to those injured.

The rescue and relief operation by police and fire service personnel is still on. A National Disaster Response Force (NDRF) team has also reached the area to assist the local administration.

However, reports claim that the rescue is being hampered by intense rains and waterlogging. All communication lines to the area have been snapped and most of the roads are blocked due to landslides and uprooting of trees. The state government’s efforts to get an air rescue team to the spot also failed due to inclement weather.

A total of 16 people have been rescued so far. Of them, four have been admitted to nearby Tata hospital.

"I heard a loud noise, and earth covered our house even before we could move," a survivor told Manorama News from a hospital in Munnar.

Heavy rains and strong winds have been battering various parts of Kerala, uprooting trees and inundating roads and several homes; over 2,000 people have been shifted to relief camps. Twenty relief camps have been set up across the state.

Nilambur in Malappuram was briefly flooded after the Chaliyar river overflowed and people in waterlogged areas were asked to shift to their relatives homes. As the heavy spells continued for the third day in Kerala, the India Meteorological Department (IMD) sounded a 'red alert' for the hilly districts of Kottayam, Wayanad and Idukki.