His comment came in the wake of the praise from WHO 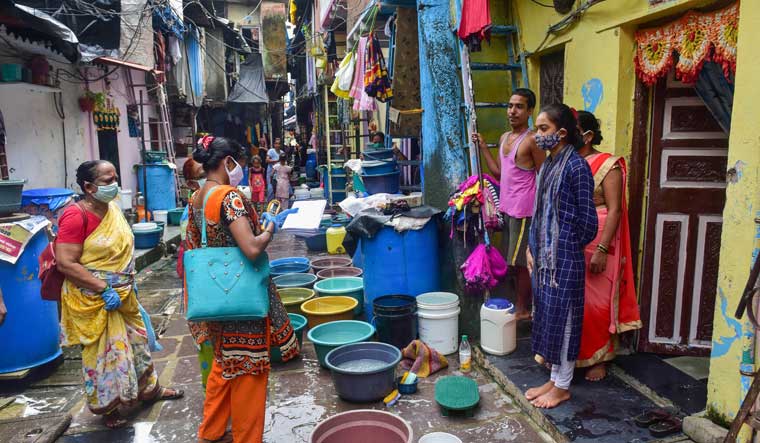 Volunteers during a COVID-19 medical health check-up at Dharavi, in Mumbai | PTI

Dharavi slum in Mumbai has emerged as a global role model for containing the spread of novel coronavirus, Maharashtra Chief Minister Uddhav Thackeray said on Saturday against the backdrop of the WHO's praise.

World Health Organisation (WHO) Director-General Tedros Adhanom Ghebreyesus had said during a virtual press conference in Geneva on Friday that there were many examples from around the world that have shown that even if the outbreak is very intense, it can still be brought back under control.

"And some of these examples are Italy, Spain and South Korea, and even in Dharavi, a densely packed area in the megacity of Mumbai," he had said.

Thackeray said Dharavi has shown to the world that coronavirus spread can be contained via self discipline and community efforts.

He said 82 per cent of patients in Dharavi have recovered from the infection, bringing down the number of active cases to only 166.

"Dharavi is an inspiration for the world on how to curb the spread of a pandemic," he said in a statement.

"This journey wasn't easy. Due to united efforts, Dharavi is on its way to eradicate coronavirus," he said.

School education minister and Dharavi MLA Varsha Gaikwad tweeted, "I am proud of all my Dharavians as today we have set an example for the word as WHO recognized and praised our efforts on the war against the virus. Lets keep up the good work and we will fight In the most strongest way (sic)".

"The Dharavi formula should be replicated in the entire state of Maharashtra," he added.

The Asia's largest slum, which was once declared a COVID-19 hotspot, has managed to flatten the curve of the viral spread.

Kiran Dighavkar, assistant commissioner of the G North ward of the BMC had told PTI that the civic body had to change its traditional approach of waiting for patients, contact tracing, isolation and home quarantine to begin proactive screening instead.

The number of coronavirus positive patients in Dharavi rose by only 12 to 2,359 on Friday.

As per official data, while in April, the doubling rate of cases was 18 days in Dharavi, it gradually improved to 43 days in May. It stood at 108 and 430 days in June and July, respectively.