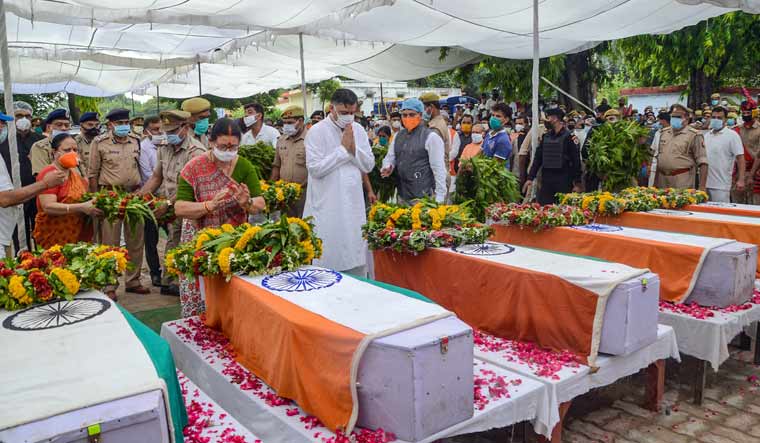 Family members pay tribute to policemen who lost their lives in an encounter at Bikaru village, at Police Line in Kanpur | PTI

Constable Sultan Singh (34), who attained martyrdom along with seven other policemen in an encounter with criminals in Chaubeypur police station area of Kanpur district, was cremated with full honours at his village Boorha Bhojla in Jhansi.

Late on Friday night, Sultan Singh's body was brought to Jhansi Police Lines, where he was given a guard of honour. Tributes were paid by police officials and district administration officers.

Jhansi Range Inspector General of Police Subhash Baghel, District Magistrate A Vamsi and Senior Superintendent of Police D Pradeep Kumar were among the other officials present at the solemn occasion.

Jhansi DM Vamsi said the financial aid and government job announced by the state government will be given to the family along with every other possible help.

In Kanpur, the last rites of Deputy Superintendent of Police Devendra Mishra (54), who was posted as Circle Officer of Bilhaur, took place on Saturday at Kanpur's Bhairon Ghat.

Mishra's daughter Vaishnavi lit her father's funeral pyre. An emotional Vaishnavi could not control her tears at the time of cremation and had to be consoled by family members and police officials.

Kanpur Additional Director General of Police J N Singh, IG Mohit Agarwal and SSP Dinesh Prabhu were present at the occasion along with other officers of police and district administration.

Kanpur SSP Dinesh Prabhu said, "The martyrdom of Mishra will not be allowed to go in vain."

In Pratapgarh, the mortal remains of Sub-Inspector Anoop Kumar Singh (32) were consigned to flames on Saturday at his village of Belkhari village. Singh's body reached the village last night.