Sasikala likely to be released from prison this year 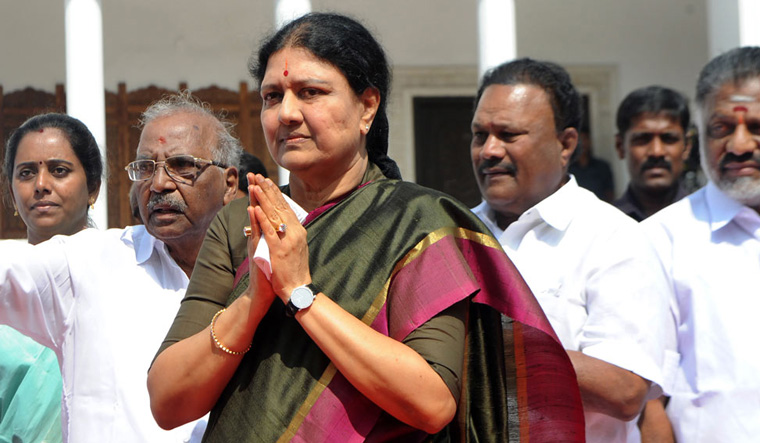 As Tamil Nadu Chief Minister Edappadi K. Palanisami on Thursday fought accusations against his government mishandling the coronavirus pandemic, the political landscape in the state was getting ready for yet another turmoil. Palaniswami will soon have to deal with Sasikala, who once chose him as the chief minister to lead the state, as her early release is on the cards.

BJP spokesperson Aseervatham Achary on Thursday tweeted that Sasikala will be released on August 14 this year.

“Mrs Sasikala Natarajan is likely to be released from Parapana Agrahara Central Jail, Bangalore in 14th August 2020. Wait for further update,” read the tweet. Speaking to THE WEEK, Achary said that he was sure about the date of release. When asked to clarify on the various legal questions pertaining to the early release, Achary refused to divulge any information, saying, “I can’t divulge anything more on this. But I am sure about the date of release.”

Incidentally, Achary is considered close to Dr Subramanian Swamy, who of late has been talking about Sasikala’s release. According to highly-placed sources in the BJP, Swamy was informed by top politicos in the Karnataka government on the eligibility of remission for Sasikala and the possibility of her early release. Sources say Swamy shared the information with Achary, who took it to social media.

Sasikala is likely to be released from prison within this year. Her jail term in the disproportionate assets case began on February 15, 2017 and she has to serve a four-year term (48 months). As of now she has served two thirds of her jail term. By the end of June 2020, Sasikala would have completed 40 months and 16 days in prison. It was in the same case that she was jailed in 1996-97 and in 2014 for 13 and 22 days respectively. Therefore, Sasikala has spent a total of 42 months and 5 days in jail by the end of June 2020 for the disproportionate assets case.

She was on parole in October 2017 and March 2018 for five and 12 days respectively, when her husband Natarajan was unwell and later when he passed away.

“By all means, Sasikala is eligible for a pre-mature release. The eligibility came up early in December 2019 itself. I have been continuously working on it. I met her on March 7 this year, before the lockdown was imposed. For the past 110 days, we could not legally strategise as I did not meet her,” Sasikala’s advocate Raja Senthoor Pandian told THE WEEK.

However, paying a fine of Rs 10 crore and IPS Roopa Moudgil’s report on Sasikala violating the prison rules might also come up, if she is released in August.

“We are ready to pay the fine amount of Rs 10 crores whenever we are asked to,” clarifies Senthoor Pandian. But on Roopa’s complaint, he says that the enquiry committee headed by Vinay Kumar IAS concluded that there was no violation and that Sasikala walked out from her cell inside the prison premises to the SP’s room to meet her lawyer.

Along with Sasikala, her sister-in-law J. Ilavarasi and her nephew V.N. Sudhakaran will also be eligible to walk out early, if the fine amount is paid. The trio were jailed, in February 2017, after the Supreme Court overruled the Karnataka High Court’s judgment acquitting former chief minister J. Jayalalithaa, Sasikala, Ilavarasi and Sudhakaran in the Rs 66 crore disproportionate assets case.