No dignity even in death for Mumbai's COVID-19 victims

With spike in deaths, most of city's crematoriums are overcrowded 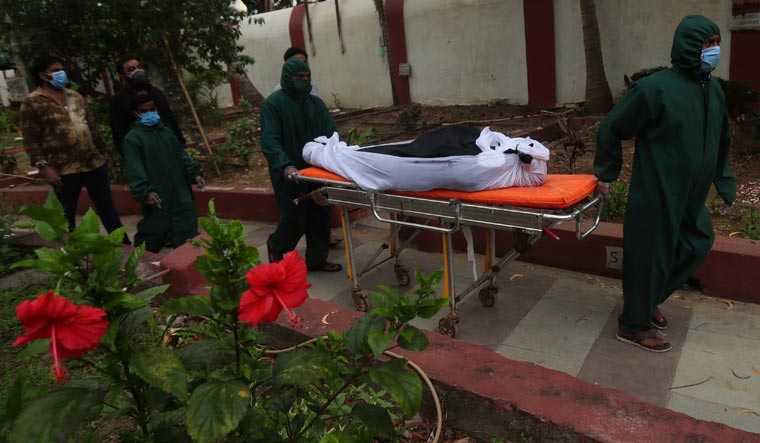 Graveyard helpers carry the dead body of a woman who died of COVID-19 for burial, at a graveyard in Mumbai | AP

While losing a loved one to the disease caused by the novel coronavirus is tragic enough, what is even more heart wrenching for the family and relatives is not being able to give the dead a dignified farewell.

As of June 16, Mumbai recorded over 2,000 deaths due to COVID-19 which is 50 per cent of the total number of deaths caused by the virus in the entire state of Maharashtra. The financial capital that has witnessed the highest number of COVID-19 related deaths, has also been suffering due to overcrowding at the city's crematoriums, with grieving families waiting for hours in long queues outside crematoriums, at times only to be asked to return.

At the time of writing this story, six bodies were waiting outside the Shivaji Park electric crematorium, one of city's major facilities with two furnaces. "We are allowed to dispose only 20 bodies a day, 10 in each furnace. But the number of dead bodies has seen a sharp increase in the last one month or so with at least six to seven bodies waiting outside at any given time," says Atul Thakur, a funeral worker at the crematorium.

But the hassles related to COVID-19 deaths begin much before the body leaves for cremation. Ambulances not reaching on time, relatives refusing to claim the body of their loved ones, families insisting on carrying out last rites despite clear guidelines against the same, and the trauma of moving from one burial ground to the other, for a lack of space and overcrowding of bodies are some of the issues that citizens have now to grapple with.

Speaking to THE WEEK over phone, she says how "wretched" she felt during those nightmarish hours. "I had never seen him like that. He was my biggest support. Even in his death he did not get the peace he deserved," she says in a shaky voice.

Kiran Dighavkar, assistant municipal commissioner in the G-north ward which includes Dharavi, recounts his "hellish" experience a few days ago when he had to "pay two men to carry an unclaimed dead body lying on the road to the cemetery at 2 am in the night”.

"I have seen people simply abandon their own family members when the latter succumbs to COVID," he says.

Policy and guidelines on handling the dead bodies of COVID-19 patients keep changing from time to time, adding to confusion among doctors, hospital authorities and patient's families. While earlier hospitals were strictly forbidden from handing over the bodies of suspected COVID-19 cases to relatives for cremation, the Union ministry on Sunday relaxed the guidelines on the same. From now on, people will not have to wait for laboratory confirmation of the infection to receive the body.

Directorate General of Health Services Dr Rajiv Garg had written a letter to Delhi Chief Secretary Viay Dev asking that the dead bodies of such suspected COVID-19 cases should be handed over to their relatives immediately and laboratory confirmation should not be awaited.

But in Mumbai, the problems actually begin right from the time an official inside the hospital has to ascribe the death to COVID-19. "Most of the time if a patient has had a co-morbidity, the death is said to have occurred because of that and not due to COVID-19. This in itself is bot, unethical and wrong," says Amol Annadate, a public health activist and practicing pediatrician based in Aurangabad district of Maharashtra.

On June 15, former chief minister and leader of opposition Devendra Fadnavis made serious allegations against the state government, stating that the latter has suppressed data about almost 950 COVID-19 deaths in Mumbai. This, at a time when the number of coronavirus deaths in Maharashtra is the highest in the entire country. In a letter written to Chief Minister Uddhav Thackeray, Fadnavis alleged that the 950 corona deaths were covered up without following the ICMR guidelines, due to unforgivable negligence on the part of the state government.

Meanwhile, the BMC has prepared a dashboard for crematoriums across Mumbai, enlisting the 46 crematoriums, and has also laid down SOP for the cremation of deceased COVID patients. As per the SOP, relatives of the deceased will not be allowed to conduct the final rituals and will be allowed to observe the body from a distance of at least a metre. The body should be filled with sodium hypochlorite after post-mortem and it is to be ensured that no liquid comes out of the body. The order further states that the dead body should be packed in a leak-proof plastic bag. The outer part of the plastic bag should be sanitized and covered in a mortuary sheet or cloth given by the deceased's family members. Clothes and other used items of the deceased must be put in biohazardous waste bins. If samples of the deceased return positive for COVID-19, the body is not to be handed over to the next of kin as per the BMC's SOP. The body should directly be taken to the crematorium for final rites.