The group, apparently, hacked the website to protest against Maneka Gandhi's remarks 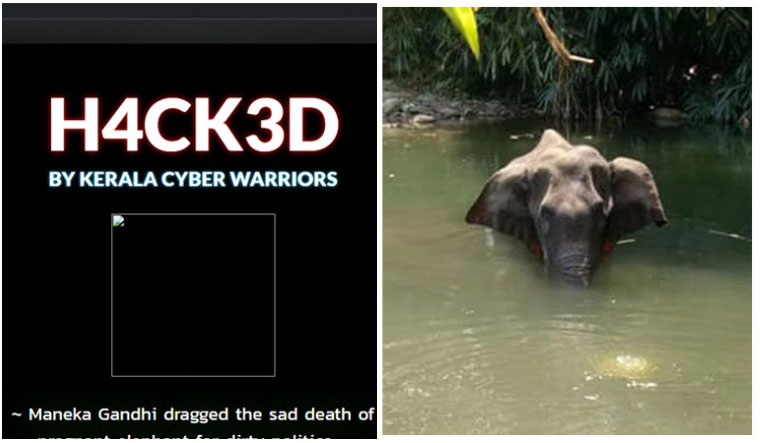 The controversy over the death of a pregnant elephant in Kerala shows no sign of abating. After the official website of the People For Animals (PFA), an animal rights body founded by BJP MP Maneka Gandhi, was hacked on June 4 by a Facebook group called 'Kerala Cyber Warriors', PFA trustee and wildlife activist Gauri Maulekhi said her organisation is considering legal action against those who hacked their website.

The Facebook group, apparently, hacked the PFA website to protest against Maneka Gandhi's controversial remarks on the death of the elephant. The website was later restored. A message on the website had read, "Maneka Gandhi dragged the sad death of pregnant elephant for dirty politics".

Reacting to the hacking of their website, Gauri told THE WEEK: "This kind of bullying, trolling and one-upmanship is not going to work. The Kerala government is trying to divert attention from the real issue here."

The 15-year-old pregnant elephant died in the Velliyar river on May 27. Her jaw was broken and she was unable to eat after she, allegedly, ate a pineapple filled with firecrackers. The incident had triggered a nationwide outrage.

Though the incident happened in Palakkad district, Maneka Gandhi blamed the people of the neighbouring Muslim-majority Malappuram district for it. Her comments did not go down well in the state, with Kerala Chief Minister Pinarayi Vijayan and Leader of Opposition and Congress leader Ramesh Chennithala taking strong objection to her statement. Assuring the people that justice will prevail, CM Vijayan said there was an "organised campaign" at the national level against Kerala and Malappuram district, and accused the central ministers of spreading contradicting facts and statements.

Congress, on Thursday, accused the BJP of giving a "communal colour" to the killing of the elephant and said the saffron party leaders were deliberately spreading "false information" on the issue.

Gauri, however, blamed the Kerala government and its policies for the death of the elephant. "A policy by which we empower civil society to hunt wildlife will have massive repercussions in the country. Hunting was banned in the country in 1972. The Kerala government, in a recent order, has incentivised hunting. Poor people have started hunting wild boar to make money. They are forced to kill wild animals because of the absurd and wicked policies of the state government."

She said it was a horrible way to kill any animal "by blowing their faces apart with explosives".

"Anybody can pick it up. Will the Kerala government take responsibility if say a child picks it up,” said Gauri.

One person, identified as Wilson, was arrested on June 5 in connection with the death of the elephant. A farmer, he is, reportedly, a native of Areekode in Malappuram district and had settled in Ambalapara in Palakkad.

“He was not the actual wrongdoer. He did it for somebody else,” Gauri said. “It is the owner of the land who has to be arrested. It was on his order that this poor guy, who has now been arrested, killed the elephant. Also, the police did not charge the wildlife protection act provisions against this person who was arrested today. They have charged him under the arms and explosive act. This is insane. The government of Kerala cannot cover up for their mistakes in this manner.”