Last year, an AIADMK leader held his son's marriage at samadhi of Jayalalithaa 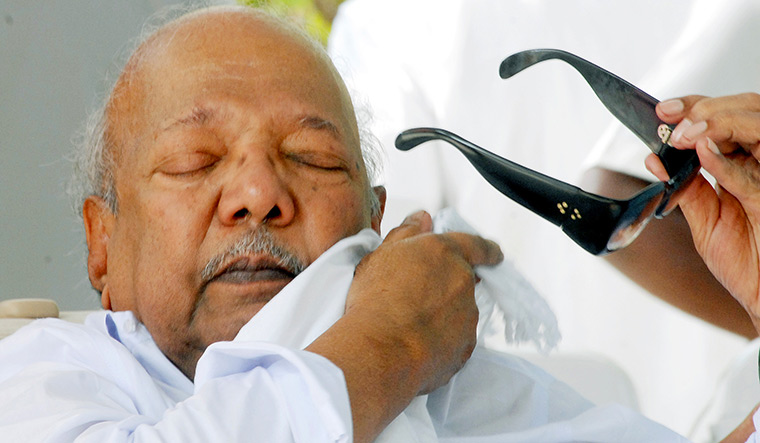 The memorial of former DMK patriarch M. Karunanidhi at Marina beach in Chennai turned into a wedding venue on Wednesday on his 97th birth anniversary, with party president M.K. Stalin presiding over the marriage of a couple after paying floral tributes to his late father.

The wedding was of a party worker, Ashok Kumar.

Stalin, along with party veterans, including Duraimurugan, showered petals at the memorial, after which he presided over the wedding.

The DMK chief handed over the 'mangalsutra' to the bridegroom and presented gifts to the couple.

'Mangala isai', the traditional music, was played by 'nadaswaram' and 'thavil' exponents when Stalin paid floral tributes and during the brief wedding ceremony.

The marriage—with the bride and groom sporting masks and hand gloves—was held sans rituals involving priests as per the Dravidian movement's ethos and in the presence of a limited number of DMK leaders and family members of the couple.

A banner in the backdrop hailed the wedding as an event of "two hearts coming together on the occasion of Kalaignar's 97th birth anniversary."

As a mark of respect, Karunanidhi is called 'Kalaignar' in Tamil which means an artist or a scholar in art forms.

Nadaswaram and thavil are percussion and wind instruments used during auspicious occasions in Tamil Nadu.

Last year, an AIADMK leader had held his son's marriage at the samadhi of late chief minister J Jayalalithaa, also on the Marina beach.

The memorial, decorated with an assortment of flowers hailed late chief minister Karunanidhi's 97th birth anniversary as "Arathin pirandhanaal", which means the "birth day of dharma."

Stalin later visited DMK headquarters 'Anna Arivalayam', party organ 'Murasoli' office, and the Gopalapuram residence of the late party supremo and garlanded his decorated portraits in the presence of party leaders and workers.

Twitter witnessed posts both hailing Karunanidhi (by hashtags like #Father of Modern Tamil Nadu) and opposing him by making allegations.

Five time chief minister of Tamil Nadu, Muthuvel Karunanidhi was born on June 3, 1924 and died on August 7, 2018 in Chennai.