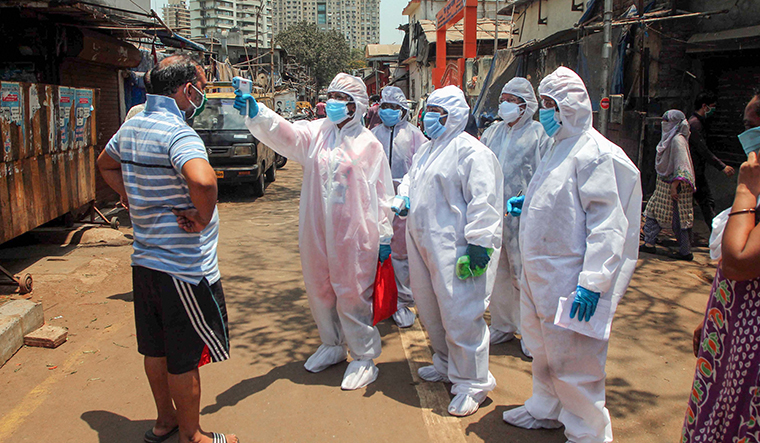 Mumbai: Doctors wearing protective suits check residents with an electronic thermometer inside a slum in Worli during the nationwide lockdown to curb the spread of coronavirus in Mumbai, Friday | PTI

India's first COVID-19 case was detected on January 30 in Kerala, and the infected was a student at the Wuhan University. India's battle with the virus started on that day, and after a lot of ebbs and slides, the coronavirus case tally reached the 1 lakh mark in 110 days (on May 18). However, the virus spread is rapidly escalating; as of June 3, India's coronavirus tally reached the 2 lakh mark—that is, close to 1 lakh new cases have been detected in less than 15 days.

On Tuesday, the Union health ministry said 8,171 new cases were detected in 24 hours, taking the tally to almost 2 lakh. The novel coronavirus death toll rose to 5,598, with 204 more fatalities in 24 hours. There are more than 97,500 active cases, while more than 95,000 have recovered. On the positive side, this is the first time in seven days that the count of new cases has come down, while the 24-hour death toll also came down considerably from 230 recorded by the Union health ministry on Monday morning—the second-highest after an all-time high of 265 deaths recorded on May 30 morning.

What do the numbers tell us?

According to NITI Aayog data as of June 1, 30 districts accounted for over 70 per cent of the total coronavirus cases; Five districts Mumbai, Delhi, Chennai, Ahmedabad and Thane accounted for 52 per cent cases.

"Hotspots need to be quickly identified with aggressive testing, contact tracing, and timely treatment is a must," tweeted NITI Aayog CEO Amitabh Kant.

Where does India stand in global COVID-19 tallies and deaths?

India is the world's seventh worst hit nation in terms of overall case count, after the US, Brazil, Russia, the UK, Spain and Italy.

In terms of the death toll, the US tops the global tally with more than 1.05 lakh fatalities, while India does not figure among the top ten countries on this parameter.

More than 27 lakh have recovered so far across the world, with the US again topping this chart with nearly 4.6 lakh recoveries, followed by Brazil, Russia, Germany, Italy, Spain, Turkey, Iran, India and China in the top ten.

Testing infrastructure has also been ramped up considerably in India in the recent months with an average of 1.2 lakh tests being conducted every day now. So far, close to 40 lakh tests have been conducted in India, putting it among the top-five nations globally on this parameter alongside the US, Russia, UK and Spain. However, India does not figure even among the top-100 countries when it comes to tests per one lakh population.

The government said India is far away from the peak of COVID-19 spread and its preventive measures have been "very effective", putting it in a much better position in comparison with other countries.

Addressing a press conference on the COVID-19 situation, Joint Secretary in the Health Ministry Lav Agarwal said it is wrong to just look at the total number of cases and state that India has the seventh highest number of cases, as the population of countries also should be taken into account. About 14 countries with a cumulative population almost equal to that of India have reported 55.2 times more COVID-19 deaths, he said.

Are we at the peak or community transmission stage?

Asked if India has entered the community transmission phase, Indian Council of Medical Research scientist Nivedita Gupta, who was also present at the briefing, said, "Instead of using the word community transmission, it is important to understand the extent of spread of the disease and where do we stand in comparison with other countries."

When asked when the peak will arrive, Gupta said, "We are very far away from the peak. Our preventive measures to curtail the disease are very effective and we are better positioned in comparison with other countries. You will get to see the data in a week."