Embankments in the Sunderban delta have been breached, many lost their homes 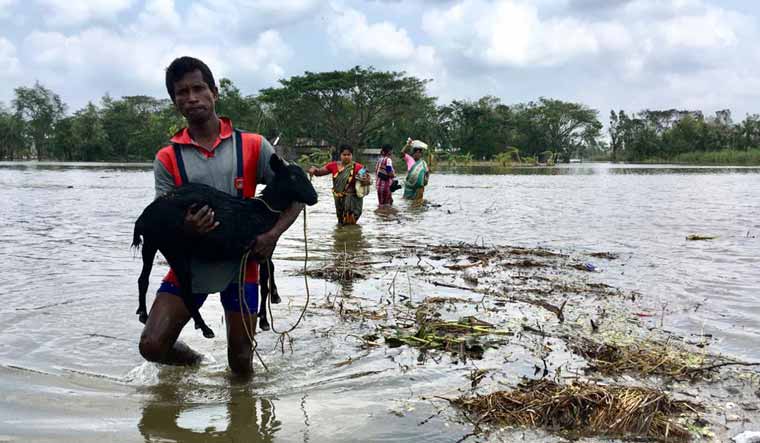 A man carries his goat across flooded terrain in Gosaba in the Sunderbans region, in the aftermath of Cyclone Amphun | Salil Bera

Pronab Biswas, a resident of Kakdwip in Sundarbans, was happy that his only son -- a migrant labourer—had returned from Maharashtra last week and had planned to buy a dinghy to start a fishing business of his own.

But the 50-year-old's plans were blown away on Wednesday by Cyclone Amphan as their home and cattle got swept away and they lost all their lifelong savings.

Biswas, who has a family of six to feed, now plans to accompany his son back to Maharashtra in search of livelihood once the coronavirus lockdown is over.

"After (cyclone) Aila in 2009, I had moved to Nashik to work as a mason there," he said. "But as I was getting old, my son replaced me and started working there for the last four years."

"I had saved Rs 10,000 and had planned to start the fishing business of my own with my son once he returns," Biswas said. "But now everything is gone, my home, my savings, my cattle."

"Two of my daughters are of marriageable age and I need money," said Biswas, sitting outside a relief camp in the area.

Biswas is in touch with the labour supply agency his son used to work for and has requested them to ensure jobs for both of them once the lockdown ends.

With livelihood lost and homes washed away, observers of the Sundarbans feel the ecologically-fragile region, which has been under stress due to rising sea levels, would witness a migration surge in the months to come.

West Bengal Sundarbans Affairs Minister Manturam Pakhira said the region had suffered losses worth thousands of crores and everything had to be rebuilt from scratch.

Embankments in the Sundarban delta—a UNESCO world heritage site—were breached as the surge whipped up by the Amphan inundated several kilometres of the islands.

"With the infrastructure badly hit, it will take a heavy toll on the livelihood of the people there," Sugata Hazra, director, school of oceanographic sciences at Jadavpur University, told PTI.

"In months to come, all of us will witness huge migration from the Sundarbans region. Whatever was rebuilt after Cyclone Aila, everything has been lost due to Cyclone Amphan," Hazra said.

According to Disha Foundation director Anjali Borhade, the cyclone would trigger a new wave of migration from the region.

"Whenever there is environmental stress, it will disrupt livelihood and create circumstances that will necessitate migration," Borhade, whose NGO works among migrant workers, told PTI.

For around 40 lakh people of the Sundarbans, spread across North 24 Parganas and South 24 Parganas districts, livelihoods like agriculture, fishing and wildlife tourism are the most predominant, apart from being migrant labourers.

With paddy fields being flooded with saline water during Cyclone Aila in 2009, thousands of youths and male members of the families were forced to move out of the region in search of better opportunities.

"In the last three-four years, several of them had returned and had started a small-time business of their own. As things started looking bright, Amphan served a deadly blow," said Ramesh Giri, a member of a local NGO that work towards training women in Sundarbans for self-help groups.

Since the Cyclone Alia, the region sends a large number of labourers to work in various parts of the country.

The ecologically fragile Sundarban region, nestled around the world's largest mangrove forest, is home to the endangered Royal Bengal Tiger. For the residents of the area, the fight for survival with nature and wildlife is a routine affair.

According to a study conducted a few years back, one in every five households of Sundarbans has at least a family member who has migrated.

"Earlier, our men used to work here. But after Aila, we lost much of our habitat due to the rising sea levels and they had to move to other states," said Shamima Mondal.

"But this cyclone took away our homes," said Mondal, standing in a queue for food outside a relief camp with a three-month-old infant and a three-year-old son.

"We don't know what would happen next."